Immigrants in Britain: evil or benefit?

Briton AP-Ipsos makes interviewer among the population in order to know Briton’s jpinion about immigrants in their country. They establish two different points of views: on one side immigrants work harder, on the other side they more likely to be involved in crime. 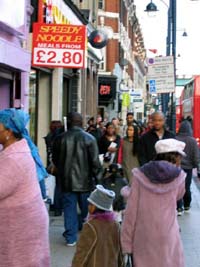 Immigrants in Britain: evil or benefit?

The British government's handling of immigration has come under scrutiny recently. Former Immigration Minister Tony McNulty was fired in late May, days after he estimated the number of illegal immigrants was "roughly in the ball park" of between 31,000 and 57,000 people. And officials recently acknowledged that since 1999, at least 1,019 foreign offenders who should have been deported after completing a prison sentence were allowed to remain in Britain.

The AP-Ipsos poll found that 25 percent of Britons believed immigrants were more likely to be involved in crime than people born in the United Kingdom.

The country has experienced an increase in arrivals from 10 nations in central and eastern Europe that joined the European Union in May 2004. Although many EU countries placed restrictions on workers from the new member states, Britain was one of three countries to open its labor markets immediately.

The new Immigration Minister Liam Byrne said immigrants "are continuing to come to the U.K. to fill gaps in the U.K. labor market" and having a "positive effect" on the country. But many Britons do not share the sentiment.

More than a fifth of the poll respondents, 22 percent, said that immigrants have a "very bad influence" on their country.

"It's a small country and, bringing people in, it is sinking into the ocean if we're not careful," said Arthur Hooker, 65, a book stall owner in Central London. But 40 percent of Britons said immigrants work harder than people born in the U.K, reports the AP.