Major oil-producing countries are set to keep crude output unchanged at an OPEC meeting Thursday despite a renewed call by Venezuela to cut production. 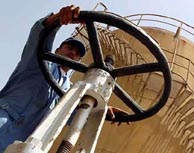 Venezuelan Oil Minister Rafael Ramirez said lower output is in order because global markets are well-supplied and stockpiles are at comfortable levels.

"There are above-average levels of crude inventory," Ramirez said. "These circumstances would lead us to adjust our production."

Many OPEC members said they were unwilling to risk driving up prices further by cutting output. But broad agreement appeared to be emerging among the 11 member countries that today's high crude prices are justified in a difficult market faced with bottlenecks at refineries and instability in places from Iran to Nigeria.

Ramirez said geopolitical tensions brought on by the U.S. were creating instability and causing high oil prices, a frequent accusation by Venezuelan President Hugo Chavez, who was expected to dominate the talks in Caracas.

"I won't be surprised to see prices go even higher," Ghanim told reporters. "There are so many factors like geopolitics and speculation, so there is no reason why prices won't go up."

Crude oil prices in New York fell nearly US$2 (Ђ1.50) and slid below $71 (Ђ56) a barrel Wednesday after the U.S. indicated it would join talks with Iran if Iran halts nuclear enrichment.

Iranian Oil Minister Kazem Vaziri Hamaneh said high inventories could create downward pressure on oil prices and dismissed concerns that crude prices were becoming a drag on the world economy. Crude "stocks are beyond demand, and this is creating concerns in the months ahead," Vaziri told reporters.

"I don't think at this current level of prices, it has any effect on the world economy," he said.

Vaziri also dismissed suggestions that Iran could face sanctions over its nuclear program.

"There is no issue of sanctions so far, and I don't think this is going to be implemented" during a six-nation meeting in Austria on Thursday, he said. He also played down a recent suggestion by one Iranian lawmaker that the country consider blockading the key oil export route, the Strait of Hormuz, if faced with sanctions.

Chavez, speaking in Ecuador late Tuesday, said the world oil market was "sufficiently supplied" and that prices were "fair."

Chavez said OPEC would make the final decision about changing output but added: "We say there's even overproduction at the moment."

Venezuela, one of OPEC's founding members and a perennial price hawk, has continued to suggest cutting production, saying oil inventories are above historical highs, reports AP.