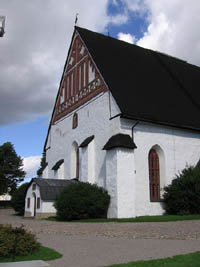 The suspects - a woman and two men who were not named - approached the police on Monday night hours after the blaze was put out and said they had set fire to Porvoo Cathedral, one of the country's oldest churches, police said.

Police in Porvoo, 50 kilometers (30 miles) east of Helsinki, said they knew of no motive but that the suspects, aged 18 to 20, were drunk at the time. They gave no other details, the AP reports.

No one was hurt in the blaze that started in the early hours of the morning, but it destroyed the roof of the stone church in the coastal town of 46,000. The church has had several fires, and it was rebuilt in the 15th century. Parts of the walls date back to the 13th century.

Surrounded by old wooden houses on a hill in the picturesque town - a popular tourist venue - the cathedral has played an integral part in the history of the Nordic country.

After 700 years of Swedish rule, Finland was annexed to Russia after Sweden lost the 1808-1809 war against Finland's huge eastern neighbor.

Russian ruler Czar Alexander I convened the Porvoo Diet in the cathedral, giving autonomy to Finland as part of the czarist empire. It allowed the Finns to keep their religion and the constitution dating from the Swedish era, in a move widely seen as a first step to eventually gaining independence in 1917.