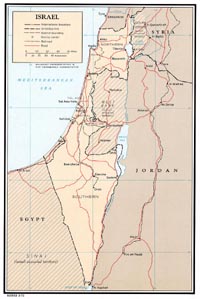 Police said Mohammed Abu Teir, Ahmed Abu Atoun and Khaled Abu Arafa were taken to a Jerusalem prison for questioning. The men are all residents of the Jerusalem area, and Abu Arafa is Hamas' minister for Jerusalem affairs.

Abu Arafa said he was ordered out of his house around 6 a.m. and questioned by police for several hours.

He said he was accused of organizing last Friday's demonstration, in which people were asked to donate money to the cash-strapped Hamas government. He said police barred him from entering the holy site, known to Jews as the Temple Mount and Muslims as Haram al-Sharif, or Noble Sanctuary, for two weeks.

"They accused me of implementing the policies of the Palestinian government in Jerusalem," he said. "I rejected all the allegations and said I have the complete right to reach the al-Aqsa Mosque for prayers ... We treat Jerusalem as an occupied city and this is something they should know well."

Israel considers Hamas, which is sworn to Israel's destruction, a terrorist group. Although it allowed the Hamas candidates, including residents of east Jerusalem, to contest Palestinian legislative elections in January, it bars Hamas from conducting any public activities in the city.

Abu Teir and Abu Arafa have been detained in recent months, only to be released after brief questioning, reports the AP.