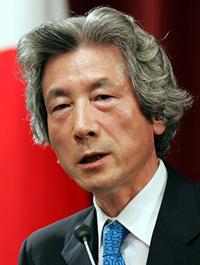 Koizumi said Japan would respond calmly to Roh's comments, and said a meeting with Roh could help smooth relations. Roh canceled a meeting last year over Koizumi's visits to a war shrine that critics consider a glorification of militarism.

"I think we should hold a summit," Koizumi told reporters. "I have always said that I am ready to carry out a summit."

The two countries faced off over the islands last week, when South Korea protested a planned Japanese survey of waters near the islets.

The row was defused over the weekend, when Tokyo canceled the survey and Seoul dropped a plan to affix Korean names to underwater formations in the disputed waters.

Both sides, however, have issued terse statements since the agreement. A Japanese negotiator said, for instance, that Tokyo would go ahead with the survey if South Korea made another attempt to register the Korean place names.

On Tuesday, Roh lashed out at Tokyo, saying its claim to the islets, known as Takeshima in Japan and Dokdo in Korean, were a legacy of Imperial Japan's 1910-1945 colonial rule over the Korean Peninsula, reports the AP.