Palestinian gunmen briefly took over the Cabinet building, protesting the refusal of the new Hamas government to meet their demands for perks and promotions. 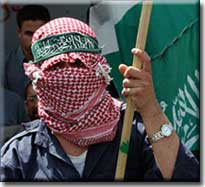 The gunmen were from the Al Aqsa Martyrs' Brigades, a violent offshoot of Palestinian President Mahmoud Abbas' Fatah Party. Fatah dominated Palestinian politics for decades but was defeated by Hamas in January parliament elections.

Earlier Thursday, the group had shut down the Transportation Ministry, forcing employees to leave the building.

An Al Aqsa spokesman said the gunmen were upset over the refusal of the Hamas government to meet their demands. The spokesman, Kamal Saffaka, said that the previous government, run by Fatah, had awarded them hundreds of taxi licenses as perks. Each license is worth thousands of dollars.

The group also demanded that its members win promotions in the security forces.

Hamas had campaigned on a clean government platform. Many Palestinians voted for the Islamic militant group because they were fed up with widespread official corruption and the lawlessness of Fatah-linked gunmen.

A Palestinian Cabinet statement called the protests "unacceptable" and said the government was committed to trying to solve citizens' grievances "according to a legal framework and in a civilized manner."

Elsewhere in West Bank, Palestinian police found the charred and beaten body of man in the town of Jericho, believed to that of a Jerusalem Arab killed as a punishment for selling property to Jewish settlers.

Palestinian security officials tentatively identified the body found in a burnt-out car as that of Mohammed Hijazi Abul-Hawa, 47, who they said had sold a four-story house on Jerusalem's Mount of Olives to settlers seeking to expand the Jewish presence in predominantly Arab neighborhoods of Jerusalem.

The body was passed to Israeli authorities for forensic examination.

Riots erupted last month, when the first settlers moved into the Mount of Olives building, during which four policemen were injured and four Palestinian protesters were arrested.

Israeli police spokesman Micky Rosenfeld said the victim was shot dead and his body and car torched, the Palestinians said the man had also been beaten around the head.

"It seems to be that he was murdered in connection with the selling of a property to a Jewish buyer," Rosenfeld told The Associated Press.

Israel says all of Jerusalem is its capital, while Palestinians claim the eastern half for the capital of a future state.

Selling Arab land to Jewish buyers is widely considered by Palestinians to be a form of collaborating with Israel and as such has, in the past, brought summary execution by militants.

Such killings have, however, become rare in recent years and none have been recorded since the September 2000 outbreak of the current Palestinian uprising, reports the AP.