Once powerful Likud is big loser in Israeli election

Leaders of the hawkish Likud said the results of Tuesday's election, based on TV projections, spell disaster for their party, relegated to the ranks of small parties in the new parliament. 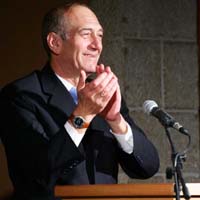 Once powerful Likud is big loser in Israeli election

The projections showed Likud gaining only 11-12 seats in the 120-seat parliament, down from 40 in the outgoing house. Most of its voters followed Prime Minister Ariel Sharon to his new party, Kadima, and stayed even after Sharon was felled by a stroke on Jan. 4.

Former Likud Cabinet minister Dan Naveh called the results "a great catastrophe, the largest in the history of the party, which means we will have a great deal of very profound soul-searching within the Likud."

Likud falls from leading the hawkish Israeli camp for nearly three decades to a secondary position, likely to be relegated to the parliamentary opposition.

The main loser is likely to be Benjamin Netanyahu, the abrasive ex-premier who took over the party after Sharon left, promising to return it to prominence. The projections showed Likud receiving even fewer seats than pre-election polls predicted, and Likud leaders expected to do much better, reports AP.

Kadima won 32 out of 120 parliamentary seats, enabling Olmert to assemble a governing coalition with other parties, according to a Channel 2 exit poll. The Labor Party came second with 22 seats, according to Channel 2. The polls indicate Olmert may be able to put together a coalition with Labor and the ultra-Orthodox Shas party that would have more than 50 percent of the seats in the Knesset.

"This is the closest we've come in years to consensus in Israeli politics,'' said Jonathan Speyer, a political scientist at the Interdisciplinary Center Herzliya, a college and research center north of Tel Aviv. "Kadima hit a chord when Ariel Sharon said it's time to get out of these territories.''

The country traditionally has one of the highest voting rates among Western democracies, but turnout was forecast to be low by Israeli standards. The Jerusalem Post called it "the most complacent campaign in Israel's history."

Polls published Monday in the Yediot Aharonot and Haaretz dailies forecast that Kadima would win 34 seats, slipping from 36 predicted last week and down from a high of 45 when Sharon was stricken 2 1/2 months ago. Labor held steady at about 21 seats, and Likud languished in third place with 14.

On the Palestinian side, Prime Minister-designate Ismail Haniyeh took a conciliatory stance in a speech before the Hamas-dominated parliament in the Gaza Strip, saying his government would be prepared to talk with the so-called quartet — the U.S., the United Nations, the European Union and Russia.

Israel has been dismissive of Haniyeh's assertions in recent days that Hamas seeks an end to conflict with the Jewish state, informs Los Angeles Times.