Acting Prime Minister Ehud Olmert, front-runner in Israel 's March 28 election, pledged Tuesday to annex this Jewish settlement deep in the West Bank , a message aimed at appeasing settlers alarmed by his stated plans to withdraw from large parts of the West Bank over the next four years. 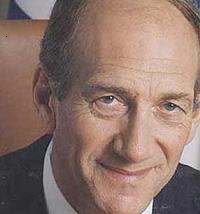 Olmert reassured the 17,000 residents of Ariel, the third largest Israeli settlement, that they and smaller neighboring settlements will eventually become part of Israel . A government official said the combined population of the sector to be annexed would be around 45,000 Israelis

"The Ariel bloc will be an integral part of Israel , whatever happens," Olmert said. "Ariel is Israel ."

Olmert's trek to the hilltop settlement came two weeks before Israeli general elections, where his centrist Kadima party is seeking to prise votes from supporters of the dovish Labor party without alienating hawks on the right. Kadima is still far ahead in opinion polls, but has been sliding in recent weeks.

His latest declaration was at odds with U.S. policy, which has blocked plans to include Ariel on the Israeli side of Israel 's West Bank separation barrier.

The Palestinians said annexation of Ariel to Israel would dash their hopes of establishing a viable state state. Ariel is located 17 kilometers (10 miles) inside the West Bank , deeper than any other large settlement bloc. "This undermines and kills the prospect of a two-state solution," said Palestinian negotiator Saeb Erekat.

On Sunday, elder statesman Shimon Peres of Kadima met in Jordan with Palestinian leader Mahmoud Abbas, the first contact with the Palestinian leadership since the election victory of the Islamic militant Hamas in January. The Peres-Abbas meeting, meant to win over moderate voters, was held with Olmert's approval.

In outlining his post-election plans, Olmert has said he would dismantle most West Bank settlements, fortify remaining settlement blocs and set the nation's borders by 2010. The blueprint was the most detailed proposal for Israel 's borders ever presented to voters by an Israeli leader, and represented a major electoral gamble.

Olmert has listed Ariel among the settlement blocs he wants to keep, along with Maaleh Adumim near Jerusalem and Gush Etzion in the southern West Bank , both close to Israel .

However, he has also said he would draw Israel 's final borders in coordination with the international community, and it appeared unlikely Washington would agree to a border jutting far into the West Bank .

In a related development, Israel has begun construction of a police station between Maaleh Adumim and Jerusalem , about nine kilometers (five miles) away. The police station is seen as the first step toward implementing a plan to build 3,500 housing units to link Maaleh Adumim , Israel 's largest settlement, to Jerusalem .

The construction would make it virtually impossible for the Palestinians to establish their future capital in east Jerusalem , the sector Israel captured from Jordan in the 1967 Mideast War.

The U.S. also opposes the project. U.S. Embassy spokesman Stewart Tuttle had no comment about the police station but repeated U.S. objections to expanding Israeli settlements in the West Bank .

On the Gaza-Israel border, meanwhile, Israel sealed off the vital Karni cargo crossing Tuesday, less than a week after a partial reopening following a two-week security closure.

Movement of goods from Gaza to Israel had been stopped previously due to fear of Palestinian attacks but shipments from Israel into Gaza, were renewed last Thursday on what Israel said were humanitarian grounds. The latest shutdown brings all activity to a halt.

Israeli security officials, speaking on condition of anonymity because they were unauthorized to make an official statement, said the latest shutdown would continue until further notice, subject to daily re-evaluation.

Karni is critical for the Palestinian economy because it is the only conduit for Palestinian exports, and the main gateway for goods entering Gaza . Its repeated closure has caused hardships for ordinary Palestinians, who reported food shortages, as well as for farmers and merchants, reports the AP.