Maldives to hold its first multiparty parliamentary elections in 2008

The Indian Ocean archipelago of Maldives plans to revise its constitution and hold its first multiparty parliamentary elections in 2008, the government said Tuesday. 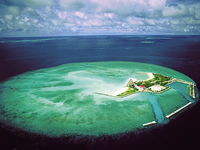 Maldives to hold its first multiparty parliamentary elections in 2008

"Work is under way to amend the existing constitution and we are hopeful to hold the national elections between July and October 2008," chief government spokesman Mohamed Hussain Shareef said by telephone from the capital, Male.

President Maumoon Abdul Gayoom has tightly governed the Maldives since 1978. He promised political reforms in 2004 in response to international pressure sparked by anti-government riots and allegations of torture of political prisoners.

Mohamad Latheef, a founder of the main opposition Maldivian Democratic Party who lives in exile in Sri Lanka, doubted the pledges would be fulfilled.

"Mr. Gayoom has broken too many promises too many times," Latheef said. "But if he is sincere this time and if the elections are held free and fair, I welcome it.

"There is no need to wait for more than two years for the elections," he added.

Government spokesman Shareef said reforms to be approved before the elections include lifting a ban on women running for the presidency, the creation of a human rights commission, limiting the presidency to two five-year terms, the creation of a position of prime minister, and a separation of the executive, judiciary and legislative branches of government, reports the AP.