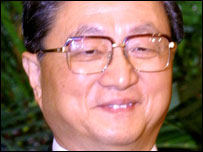 Media reports last week said Vice Premier Huang Ju had been diagnosed with cancer and was expected to step down.

Wu Jianmin, spokesman for the Chinese People's Political Consultative Conference, the advisory body to the legislature, said Huang had been "unwell and underwent treatment in the hospital."

"He's getting better now," Wu said at a news conference for the CPPCC, whose annual session begins Friday, two days before the National People's Congress convenes. He did not give any details on Huang's illness or treatment.

Huang, 68, headed Shanghai's Communist Party branch from 1995-2002. He has been absent from important public functions since January, the newspaper said, citing unnamed sources.

If Huang were to step down, it could increase uncertainties leading up to a party congress next fall, when President Hu Jintao is expected to shuffle key posts and promote his own supporters as elder leaders retire, reports the AP.