Erdogan wants Turkish-Russian relations to be better than ever before

Turkey wants to lift trade restrictions with Russia, Turkish President Recep Tayyip Erdogan said prior to flying to Sochi, where he holds a meeting with Russian President Vladimir Putin. 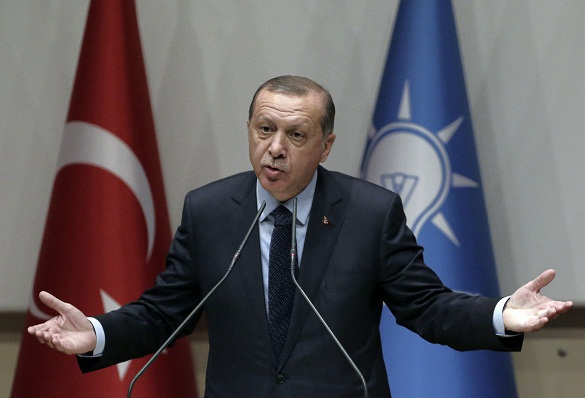 "Russia and Turkey can not afford losing even one second of time because of bureaucratic delays," Erdogan stated. According to him, the leaders of Russia and Turkey maintain a close contact with each other on the issue of trade restrictions that Russia imposed against Ankara.

Erdogan also said that the leaders of the two countries make great efforts to resolve existing issues and bring back their relations to the level, "which was lost on account of certain events."

"If Turkey and Russia want to achieve a trade turnover worth $100 billion, they must take constructive steps to this end, which is a prerequisite," Turkish President Erdogan said, answering a question about Russia's "trade restrictions" against Turkey.

In Sochi, Erdogan and Putin also plan to discuss military operations in Syria.

According to Erdogan, lifting visa restrictions is another condition for an effective development of Russian-Turkish relations. In April, spokespeople for the Russian Foreign Ministry announced their  readiness to facilitate the visa regime for certain categories of Turkish citizens.

Moscow introduced the visa regime for Turkish citizens in the midst of the crisis in the relations between the two countries in November 2015. The decision entered into force on January 1, 2016. Turkey did not provide any visa restrictions in response.

On October 1, Turkish President Recep Tayyip Erdogan announced his intention to establish relations with Moscow and develop bilateral cooperation. The Turkish administration hopes to take the Russian-Turkish relations to a level higher than it was before Turkey shot down a Russian Su-24 in November of 2015.