A key project drawing Russia and Turkey nigh: The Turkish Stream 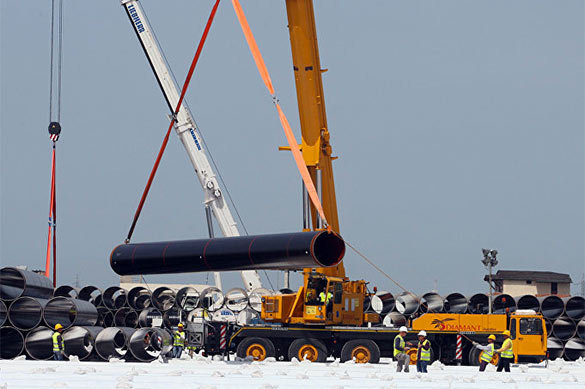 Anatolia has always served as a bridge between the East and the West in many ways. First of all, it was the route Christianity took to spread to the West of which one can still notice the traces. Scientific developments reached Europe through this channel and European pilgrims travelled to China, India, and the Middle East again through this route. Even the Silk Road, which has been revived with a new name recently, passes through Anatolia to finally arrive in Europe. Anatolia today undertakes a big responsibility of carrying the energy supplies the West needs from Russia: The Turkish stream.

Recently, many people have probably heard about this new energy project that was endorsed officially by Russia and Turkey in October 2016. However, this project isn't newborn as many might think, it hit the headlines in 2014 and has been known by public since then. However, it goes further back to 2005 as Presidents Putin and Erdogan had a meeting in Sochi when they talked about constructing another pipeline under the Black Sea. It was not finalized as Turkey thought that expanding the current Blue Stream would be sufficient for Turkey's energy needs.  Therefore, after a long pause the two countries ratified the energy deal in 2009. Back then, Blue Stream II was the name given to the possible pipeline project and there were negotiations and mutual contacts to finalize this initiative, however, the talks did not reach a conclusion. In 2014, in a meeting in Ankara, Putin mentioned the Turkish Stream project after a long period of silence and at the end of 2015, the crisis occurred and the links between the two countries came to a grinding halt for a short period. It is noteworthy to point out the importance of this project, since the Turkish stream was the first order of business Turkey said yes to when the relations started to normalize.

Turkey, being the second biggest exporter of Russia's gas after Germany is currently supplying 14 bcm gas via Ukraine, Bulgaria, Romania and Moldova. With the establishment of the Turkish Stream, Turkey will receive 15.75 bcm with a cheaper price since it will not need to take gas from other routes. Even though Turkey and Russia have significant energy relations via the Blue Stream and West Line, this new project will draw them closer in terms of politics and trade, as well. The Turkish government issued a circular at the beginning of April 2017 to accelerate the construction of the Turkish Stream Pipelines. The circular that was printed in the Official Newspaper with the PM Binali Yildirim's authorization, calls all the public institutions to work with coordination to complete the construction at the soonest time.  The circular also mentions that this project is essential for the development of the country and therefore needs self-abnegating work.

This energy project will consist of four pipelines, two under the sea and two on land. Gazprom announced that the construction of the offshore part will begin in the second half of 2017 and estimated to be completed by the end of 2019. According to circular issued by Russia, South Stream Transport B. V. company was declared to initiate the design, construction and operation of the two sea lines. While BOTAS will commit to the construction and the operation of the 1st land line, the second land line will be utilized by companies determined by the two countries joint decision. South Stream Transport B.V.'s opening an office in Istanbul to coordinate the operations in Turkey is considered to be an important signal indicating that the permission has been given to move operationally forward smooth and fast.

With the first line, Turkey will be able to meet its energy needs and with the second line Turkey will serve as a conduit to transport the gas to the South of Europe. The transmission of the gas in the West Line through Ukraine, Moldova, Romania and Bulgaria borders will be halted when the first line of the Turkish Stream commences. This will be a political advantage for Russia given its tension with Ukraine and an economic advantage for Turkey since it will receive the gas without a transfer fee or a toll, and it can capitalize by charging a fee to the end customer. Additionally, this will also provide a security advantage for Turkey.

Since natural gas is vital for countries that do not have their own energy sources and dependent on other countries, the EU is seeking new ways of supplying gas for their increasing energy needs. This new project will also have a positive impact on the ties between Turkey, Russia and the European countries. Balkan states will feel more secure to have an alternative route since the Ukraine conflict previously disrupted supplies and the gas was halted.

Today, the world is filled with conflicts and especially in the Middle East where surprises come often and it's anybody's guess as to what will happen next. Countries benefiting from having good relations with each other one day, may find themselves at odds the next day. Therefore as much as possible, countries opt for self-reliance to meet their own needs and do not want to rely upon others.  For example, if there is a disagreement with another country to which they are dependent on, contractual obligations could be affected and may result in a deep crisis. Countries having joint energy deals seem to be more meticulously aware in their relationships since their need to be at peace with each other is pertinent to satisfying their energy needs. Striving to form agreements on good terms for energy deals should serve as a good model for other countries that are willing to form alliances in the region. Countries should be at peace with each other, no matter what, with or without any such energy deals.  Such relationships could foster and mature very easily if each country behaves in a selfless manner.  Moreover, energy has been the one common denominator for almost every period in history, in which alliances were built, borders were drawn, and countries fragmented into blocs. In the past energy resources were the cause of major wars, yet it doesn't have to be that way and in the future it can be the source of peace.  Every country relies upon and needs energy to survive, thus pacts and agreements based on energy can and will bring wealth and prosperity to the region. In this regard, a great responsibility falls on the political, religious and community leaders, and the patriotic citizens to change their view on how energy resources can be used beneficially for peace and who are ready to make sacrifices to achieve such goals for the well being of the region.