What Russia, Syria and Iran agree upon in Moscow

Foreign ministers of Russia, Syria and Iran have met in Moscow on 14 April. Allies have discussed important issues after Rex Tillerson's visit to Russia. 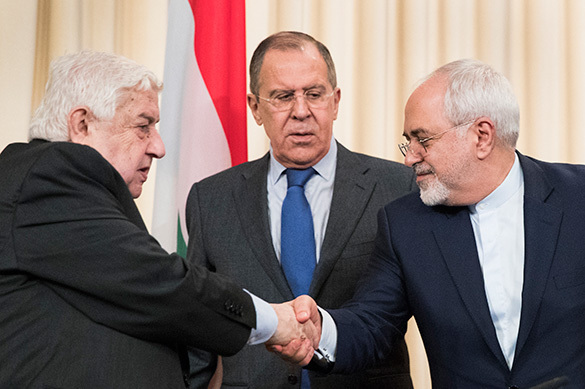 As Maria Zakharova, official representative of the Russian Foreign Ministry reported before, 'possible joint steps will be considered to minimize negative consequences of this gross violation of international law for international and regional peace and security'.

As Pravda.Ru reported, Rex Tillerson does not lose hope to persuade Russia to begin cooperation with the US and refuse from supporting the Syrian President Bashar al-Assad.

However, it is still not clear whether Tillerson managed to persuade Russia regarding Assad.

Sergey Ordjonikidze, Deputy Secretary of the Russian Civic Chamber, former Deputy Secretary General of the UN, has told Pravda.Ru about meeting of Sergey Lavrov with Foreign Ministers of Syria and Iran.

It was if not coordination, correlation of mutual steps at least, approaches to solution. These are main players in settling the Syrian problem. A lot will depend on understanding among these three countries. Turks are out. They do not take part in this event either economically or politically. We should consider how to act without them.

There are no disputes. However, every country has its own plans for the future. In Iran elections will take place. No one knows how they will act afterwards. I believe they will be hogging the cover to some extent.

The problem is Army of the Guardians of the Islamic Revolution, Hezbollah and Israel. They cannot find modus operandi of a non-conflict character. Iranians say that Israel should be annihilated, Hezbollah says the same. While Israel is ready to strike them. And we do need that one more conflict, one more hot spot at all. Russia should be content at the present Iran and consider what can be done in the future together. Various interests of the countries should be taken into account.

I believe that other forces will interfere in our relations. The Americans will definitely try to persuade us to refuse this alliance with Iran. But that is not going to happen. The US will be offering some options, hinting that we should watch the Middle Eastern situation in a serious and global way. But as they carried out a strike against a sovereign state, it is evident that they are ready to apply force in other parts of the world too. I do not exclude that they may go the length of it in the South-Eastern Asia, in particular, the Korean peninsula. And thus, one more big conflict will occur there.