James Comey to be taken out, knows too much about Clintons

James Comey, Director of the FBI, can be sacked for a 'thoughtless step' - intrusion into elections. Valerie Jarrett, Obama's adviser, managed to convince him of necessity to undertake such a step, Daily Mail reported with a reference to a source in the White House. 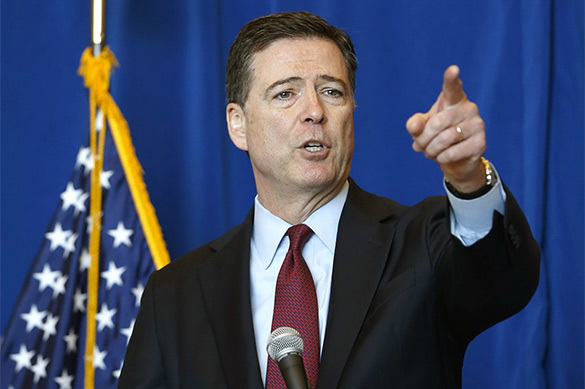 At the same time, other sources assert that Comey himself is ready to resign, not waiting for Obama's decision. In the FBI many believe that the Director has prejudiced reputation of the bureau and lost his weight among employees.

Reopening of investigation against the presidential candidate Hillary Clinton 'for no apparent reason' and spontaneous closure of the case... Isn't Comey though a political figure? Could he have initiated everything by himself?

Viktor Olevich, a political analyst, has commented Pravda.Ru on the issue.

James Comes is a high-ranking political manager in the American system. He has long-standing relationship with the Republican party, he has been its adherent for several decades. He was taking various stances, which correlated with the Republican party's policies, including that regarding a conflict between the US law-enforcement and Afro-American community, where his stance was closer to the Rights than the current Administration of the White House.

Head of the FBI took part in a corruption investigation regarding Bill Clinton in the early-2000, when a multimillionaire Marc Rich was pardoned by the president Bill Clinton. As a result of the investigation, the former president was not prosecuted. Nonetheless, Comey's attitude to Clintons is still quite suspect, negative.

It's not by chance that last Friday, 11 days before elections, investigation was renewed by decision of the FBI Director. Moreover, a dossier on that investigation of Clinton's corrupt activity - Jams Comey carried out 15 years ago - was leaked via the FBI Twitter account. These are absolutely interrelated events. In such way, Comey tried to pressurize Clinton's campaign. However, just two days ago Comey announced that the new investigation was stopped.

It's clear that certain negotiations between Comey's bureau and other parts of the US establishment took place. Those talks resulted in the fact that a case on potential disclosure of a state secret while using a private server when Hillary Clinton was a State Secretary, was closed yer again.

It's no surprise that Obama's Administration is going to get rid of unwanted head of the FBI and substitute him for a person that will be favourable for new administration of Hillary Clinton, as she will evidently win today.