US officials have always refused to acknowledge the fact that monarchies of the Gulf sponsor jihadists. Instead, US officials say that the support was coming from wealthy donors of those countries. They lied, and one can see it in the email correspondence of John Podesta, a member of Hillary Clinton's team, as exposed on WikiLeaks. Moreover, it turns out that Hillary Clinton created an arms mafia for her own personal enrichment. 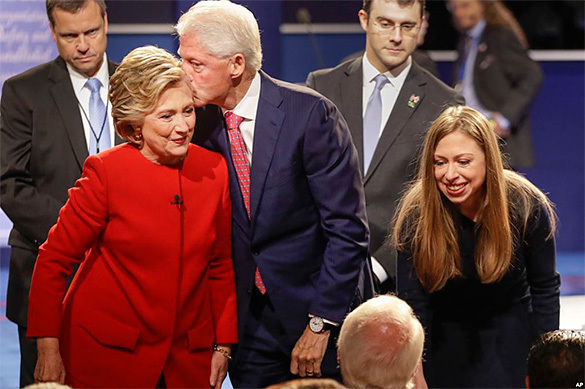 Chairman of Hillary Clinton's campaign, John Podesta, briefly tells of the content of Hillary Clinton's paid meetings with representatives of Wall Street: Goldman Sachs, Morgan Stanley, Deutsche Bank and others. The meetings took place a year after Clinton left the post of the US Secretary of State and started getting ready for the presidential race. One of the emails from 19 August 2014 said that Western intelligence sources were aware of the fact that the Gulf monarchies were supporting the Islamic State terrorist group (banned in Russia).

"...We need to use our diplomatic and more traditional intelligence assets to bring pressure on the governments of Qatar and Saudi Arabia, which are providing clandestine financial and logistic support to ISIL and other radical Sunni groups in the region," the email said, according to WikiLeaks.

Another email dated from January 25, 2016, contains an excerpt from Clinton's speech to bankers in October 2013, in which Clinton admitted that the Saudis had exported a more extreme ideology than any other state in the world for the past 30 years.

"Some of us thought, perhaps, we could, with a more robust, covert action trying to vet, identify, train and arm cadres of rebels that would at least have the firepower to be able to protect themselves against both Assad and the Al-Qaeda-related jihadist groups that have, unfortunately, been attracted to Syria," she noted in the same speech. "That's been complicated by the fact that the Saudis and others are shipping large amounts of weapons-and pretty indiscriminately-not at all targeted toward the people that we think would be the more moderate, least likely, to cause problems in the future, but this is another one of those very tough analytical problems," Hillary Clinton added.

Noteworthy, the Gulf countries had been the largest sales market for weapons from the United States in the period from 2011 to 2015, the International Peace Research Institute in Stockholm (SIPRI) said in a report from 2016. Compared with the period from 2006 to 2010, the US had increased shipments to Qatar and Saudi Arabia thrice, the report said. SIPRI also said that the world's largest defense company, the US-based Lockheed Martin, signed several multi-billion-dollar deals with Saudi Arabia in 2015. The company's revenue amounted to 46.1 billion dollars in 2015, which was about 500 million dollars more than in 2014. The stocks of the company have been rising in prices during the recent year too.

According to US media reports, Qatar provided from one to five million dollars to the Clinton Foundation over the past decade, while Saudi Arabia - more than $25 million. Last year, the Saudi Center for Media Affairs paid $200,000 to the The Podesta Group PR agency for public relations services. In 2010, Clinton's top aide said that the shipment of fighter jets and helicopters to Saudi Arabia worth up to $60 billion, was her "top priority."

Why would Clinton talk about politics to bankers and be honest with them? Why did Goldman Sachs and other Wall Street bigwigs agree to insure the lives of immigrants from Syria, in accordance with Obama's plan to increase the flow of migrants by 500 percent? Is it because Goldman Sachs and others invest heavily in the production of ammunition for Saudi Arabia and Qatar, including cluster bombs that are then shipped to the Islamic State?

We have an interesting chain: Hillary Clinton executes the order from the US defense industry to enrich bankers. The weapons are sold to customers - Saudi Arabia and Qatar that subsequently ship them to the Islamic State. Terrorists use those weapons to kill civilians and promote their Wahhabi ambition. What does Bashar Assad have to do here?

This is a typical mechanism of the US military machine that bribes politicians and wages wars. It is sad, though, that the US government blames everything on Russia and deceive the American people.

The degree of Hillary Clinton's hypocrisy can be seen in a quote from her speech after the tragedy in Orlando on June 12, 2016:

"It is long past time for the Saudis, the Qataris, and the Kuwaitis and others to stop their citizens from funding extremist organizations. And they should stop supporting radical schools and mosques around the world that have set too many young people on a path toward extremism," Clinton said in a national security speech in Cleveland, Ohio.

Clinton did not say that the Clinton Foundation had accepted millions and millions of dollars from the countries that jail and execute people for being gay. She accuses "citizens," but not governments. Hillary Clinton appears to be a guardian of security, who sponsors terrorism and fights against jihadism at the same time. Her lies have no limits indeed.