Dad and brother of Daesh agree to fight against it. Or 'for' it?

Presidents of the US and Turkey Barack Obama and Recep Erdogan have agreed over a phone conversation of 19 January to enforce cooperation in fight against the Islamic State, according to the White House. 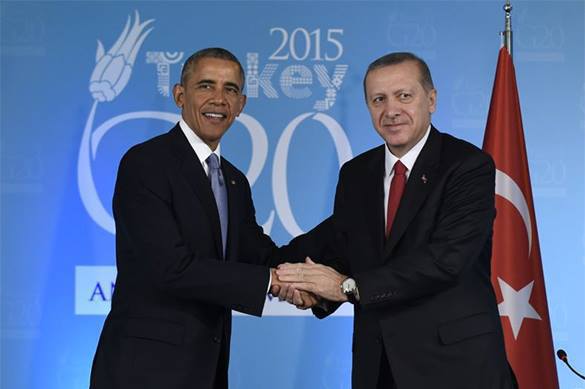 The official report says that leaders of both countries engaged themselves to enforce cooperation in fight against terrorism and called the Islamic State annihilation to be their common goal.

It is noted that Barack Obama also expressed his condolences given the terror act of 12 January in Istanbul and condemned the attacks of the Kurdistan Workers' Party fighters, as well as emphasized necessity to deescalate tense situation.

Associate Professor of History and Politics of European and American countries at MGIMO, Andrei Kryzhanovsky told Pravda.Ru how it would influence the power balance in fight against terrorism.

'The Turks need the IS for commercial reasons, they supply oil and get decent profits. For the US the IS is a tool to destabilize situation in the Middle East, which is necessary to dethrone regimes, that don't obey the Washington Administration. But the IS exhausts its mission and satisfies the currents demands of Washington less and less. And as usual in such cases a group is being used and then annihilated, while they can even cooperate with current opponents of this group,' he said.

'In this case the US should join the winning side and pretend that it also fights against the global terrorism, that is also very important from the image point of view. Obama's aim, as he used to say it, is to raise the Syrian opposition to power. Mission of the IS is coming to an end and the US can oppose the IS more actively,' Andrei Kryzhanovsky explained.