The authorities of the Latvian town of Bauska, located to the south of Riga, unveiled a monument to three battalions of the Latvian legion of Waffen SS punitive police, RBC reports. The inscription on the monument says that the monument is dedicated to "Bauska's Defenders Against the Second Soviet Occupation." It also says that "Latvia is for Latvians." 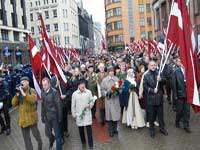 According to Vesti, it became the first monument to punitive police in the Baltic states. Nazis used the battalions to exterminate hundreds of civilians in the Pskov region of Russia, in the Brest region of Belarus, as well as near Dnepropetrovsk.

Local human rights activists from the Association Against Nazism has already demanded the monument should be either dismantled or move to a cemetery. Representatives of the organization ​​said that official authorities should not allow the glorification of Nazism.

"The Association Against Nazim believes that the monument should be removed or moved to the Waffen SS Cemetery, while Bauska mayor Valdis Veips should resign and apologize to the people who suffered from the atrocities of Nazism in Latvia," the head of the organization said.

According to him, the Association will address the Minister for Regional Development and Environment Protection of Latvia, Edmunds Sprudzs, seeking the mayor's resignation, said Rosbalt.

The Latvian SS Legion was created in 1943 in the Nazi-occupied Latvia. Its members took part in punitive operations against partisans and civilians. The majority of legionaries were killed or captivated by Soviet troops during the war.