Five young Americans detained in Pakistan, which is fighting a violent Taliban insurgency, wanted to join a holy war and were in contact with militants through the Internet, officials said on Thursday. 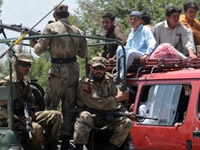 The five students in their 20s from northern Virginia, were detained this week in the city of Sargodha in Punjab province, 190 km (120 miles) southeast of Islamabad, security officials said.

The suspects were being investigated for possible links to a Pakistan-based group suspected of carrying out high-profile attacks and with links to the Taliban and al Qaeda.

The case will likely again focus attention on nuclear-armed Pakistan's performance in fighting militants as Washington presses Islamabad to root out Islamist fighters crossing the border to attack U.S.-led troops in Afghanistan.

"We watched them for one and a half days and then arrested them," Usman Anwar, police chief of Sargodha, told reporters. "We seized laptops and other things from their possession. Later we came to know that they have come here with the intention of 'jihad'."

The case could fan fears in Western countries that the sons of immigrants from Muslim countries are being drawn to violent Islamist militancy, a process made easier by the Internet.

A Pakistani security official said the men were detained on Monday. They had flown to Karachi on November 30 and then travelled to Lahore on December 5, and then on to Sargodha, he said.

"No charge has been framed against them. Investigations are under way as to whether they have any links with extremist groups," said the official.