It follows two days of riots in the capital, Uganda, in which at least 11 people were killed. 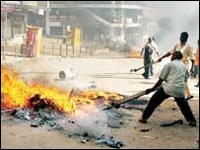 The spokesman said the king did not want to see violence spreading to the town, Kayunga. But he stressed the event was postponed, not cancelled, according to BBc news report.

The Republic of Uganda  is a landlocked country in East Africa. It is bordered on the east by Kenya, on the north by Sudan, on the west by the Democratic Republic of the Congo, on the southwest by Rwanda, and on the south by Tanzania. The southern part of the country includes a substantial portion of Lake Victoria, which is also bordered by Kenya and Tanzania.

Uganda takes its name from the Buganda kingdom, which encompassed a portion of the south of the country including the capital Kampala. Half the population of the country live below the international poverty line of US$1.25 a day.