Afghan President Hamid Karzai said Tuesday that he has asked the king of Saudi Arabia to help facilitate peace talks with the Taliban in order to bring an end to the Afghan conflict. 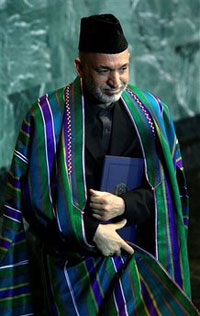 Karzai said there have not yet been any negotiations, only requests for help. But he said that Afghan officials have traveled to both Saudi Arabia and to Pakistan in hopes of ending the conflict.

"For the last two years, I've sent letters to the king of Saudi Arabia and I've sent messages, and I requested from him as the leader of the Islamic world, for the security and prosperity of Afghanistan and for reconciliation in Afghanistan ... he should help us," Karzai said.

Speaking on the grounds of the presidential palace, where he gave his traditional message to Afghans for the Muslim religious holiday of Eid-al Fitr, Karzai said his government is trying to encourage militants to lay down arms.

He underscored that he has in the past reached out to Taliban leader Mullah Omar to "come back to your home soil and work for the happiness of the people."

Afghan officials have long tried reaching out to the Taliban and other militant officials in hopes of sparking peace talks. But those efforts - including efforts by Karzai's administration - have largely been rebuffed.

The fugitive Taliban leader Omar, meanwhile, released his own Eid message and launched a barrage of accusations against Afghanistan's security forces, calling them thieves, smugglers and criminals not worthy of people's trust.

Omar's message did not include any indication of willingness to talk to Karzai's government. Instead, it called again on foreign troops to leave the country.

A former senior Taliban official told The Associated Press last week that the militants do not consider Karzai a strong leader who can uphold and implement any potential deal if the U.S. does not agree with it. He spoke on condition of anonymity because he did not want to be identified.

American officials have not indicated they are ready for any contacts with high-level Taliban leaders, though U.S. officials do encourage militants to lay down arms and join the Afghan government's reconciliation program.

An Afghan opposition leader, former President Burhanuddin Rabbani, told The Associated Press earlier this year that Afghan political leaders have been meeting with Taliban and other anti-government groups in hopes of negotiating peace.

Rabbani says Afghanistan's six-year war must be solved through talks, echoing a view held by many in the country. He said some Taliban are willing to negotiate, but others are not.

Karzai, in his message Tuesday, said he would personally protect Taliban and other militant leaders from U.S. and NATO troops if they come back to Afghanistan for talks.

"Don't be afraid of the foreigners. If they try to harm you, I will stand in front of them," Karzai said.

Karzai said that "everybody knows" Afghan officials are working toward peace efforts, and that if there is any progress, Afghan officials would announce it. "There hasn't been anything practical, but we are hopeful it will happen," he said.

The buildup of the Afghan security forces is the centerpiece of the American counterinsurgency strategy in Afghanistan, and Omar's Eid message appeared to react to that.

Afghan, U.S. and other international officials recently decided to increase the size of the Afghan army to 134,000, raising the previous cap of 80,000.

"There are thousands of security forces ... and it is clear that they are criminal, thieves, and the people can not trust the security forces at all," Omar said in a statement posted on a Web site that has carried many Taliban statements in the past.

"Foreign forces are the thieves of our culture, faith, as well as natural resources, in the same way the army and police steal the money, dignity and the honor of the people."

Omar also called on militants not to harm civilians during their operations.

Omar went into hiding after a U.S.-led invasion toppled his hard-line Islamist Taliban regime in Afghanistan seven years ago. Afghan officials have said he is hiding in or near the Pakistani city of Quetta. Pakistan says he is in Afghanistan.