The Republican National Convention showcased a Native American color guard, a black preacher and video footage of civil rights pioneer Rosa Parks, all part of its effort to present the Republican Party as a picture of diversity. What it hasn't offered is many minorities speaking from the podium in prime time, or sitting among the delegates. 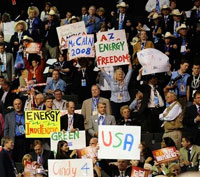 The convention has a decidedly homogenous look to it, coming hard on the heels of a Democratic gathering where minorities were prominent on the podium and in the crowds, and the spotlight focused squarely on Barack Obama's historic racial breakthrough.

Not that Republicans have been deliberately denying broad exposure to prominent party members from minority groups _ there just aren't that many.

The party had hoped to showcase Louisiana's Republican Gov. Bobby Jindal, the first elected Indian-American governor in the United States. But he stayed home to help coordinate the state's response to Hurricane Gustav. The Republicans have no black governors or members of Congress to put on stage.

It's a problem for the party that goes deeper than the challenge of coming up with a diverse speaker's lineup.

"It is what it is," said Michael Steele, Maryland's Republican former lieutenant governor and the first black person elected to statewide office there. "You can't sugarcoat this stuff."

Steele, who chairs GOPAC, which recruits and trains Republican candidates nationwide, got 10 minutes on the podium in prime time Wednesday night.

Earlier in the evening, a number of blacks and Hispanics had a chance to address the convention, albeit briefly. Among them: a nurse from Pennsylvania, a California state senator, the head of a Hispanic medical organization, and an entrepreneur whose mother was an orphan of Mexican descent.

Texas Railroad Commissioner Michael Williams, who is black, also spoke, and later had the opportunity to place McCain's name before the delegates in nomination. He alluded to the historic significance of Obama's breakthrough as the first black presidential nominee for a major party, a nomination he accepted at the Democratic convention in Denver.

"But I am here with you in St. Paul, (Minnesota) rather than being in Denver last week, because I believe values and ideas take precedence over the politics of demography and identity," Williams said. "And because I know John is ready to lead."

It is a message the Republicans hope will be embraced more broadly among black Americans, many of whom are captivated by Obama's path-breaking course and are predominantly Democrats.

The predominance of white faces on the podium in St. Paul was reflected in the faces staring back from the audience. About 13 percent of Republican delegates identify themselves as belonging to a minority group, according to convention organizers, who provided no further details on the ethnic breakdown. (According to the U.S. Census, about a third of Americans as a whole identify themselves as minorities.)

Joanna Burgos, a spokeswoman for the convention, said the convention figure is more than double the minority participation at the Republicans' 1996 convention.

"We look forward to continuing and expanding these relationships - and nominating John McCain, a Republican leader who values the diverse backgrounds of all Americans and will lead on issues important to them," she said.

However, minority representation is down from 2004, when about 17 percent of delegates and alternates were minorities.

Joseph Wood, a black delegate from Arkansas and treasurer of the state Republican Party, said there are more important things to consider than how many minorities are standing on the podium.

"Would we like to see more now at the senior level at the conventions?" he asked. "That would be great, but we already know that they're in prominent positions in the Cabinet under George Bush and his dad and Ronald Reagan. I'm not sure we're missing anything at this meeting just because there's not a whole platform onstage of minorities."

"You just haven't dug deep enough. Because at the grass-roots level there are those who can articulate" a strong message to minorities, he said.

Steele, the GOPAC chairman, said McCain has demonstrated his ability to connect with blacks and other minorities in his appearances before groups such as the National Association for the Advancement of Colored People and the Urban League, although he doesn't always get credit for it amid all the focus on Obama's history-making candidacy.

"God forbid you say a Republican has juice with black people," Steele said. "I think he has more juice than people give him credit for. People will probably laugh at that, but let them keep on laughing. I think they'll be surprised at how well he'll connect."