FBI finds anthrax killer in its own backyard

The investigation spanned six continents, but in the end, U.S. federal investigators say they found the anthrax killer in their own back yard. 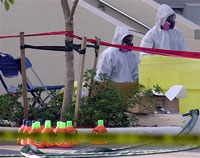 FBI finds anthrax killer in its own backyard

The government declared the 2001 attacks solved Wednesday, pointing the blame at former Army scientist Bruce Ivins, who committed suicide last week as prosecutors prepared to bring charges. The Justice Department said it was confident it could have convicted the scientist, who spent his career developing anthrax vaccines and cures at the bioweapons lab at Fort Detrick, Maryland.

Authorities cited advanced DNA testing that showed Ivins, 62, had in his laboratory anthrax spores identical to those that killed five and shocked a nation still reeling from the 2001 terrorist attacks.

Prosecutors described Ivins' unexplained late nights in the laboratory just before the attacks. They released an e-mail excerpt that used language similar to that of one of the anthrax letters. They said he was angry about criticism of his anthrax vaccine and might have released the toxin to drum up support for his drug.

It was enough for the Justice Department to declare solved a case that had been one of the most prominent unsolved cases.

"We regret that we will not have the opportunity to present evidence to the jury," U.S. Attorney Jeffrey Taylor said.

But it was not enough to convince Ivins' supporters and may not be enough to quiet critics who say the FBI was looking for someone to blame after focusing on the wrong man for too long.

"I just don't think he did it and I don't think the evidence exists," said Ivins' attorney, Paul F. Kemp, adding that prosecutors' best evidence made only "a good case for continuing the investigation. But I think they're done with it. I think they're burnt and they've got nowhere to go with it."

Investigators at the FBI and U.S. Postal Service originally thought al-Qaida may have been behind the attacks. The case "quickly became a global investigation, spanning six continents," said Joseph Persichini, assistant director of the FBI's Washington field office. It wasn't long, though, before the government began focusing on one man, Fort Detrick scientist Steven Hatfill. It would be years before DNA technology narrowed the field to Ivins and a handful of others who had access to a specific batch of anthrax.

Hatfill got $5.8 million to settle a lawsuit he filed against the Justice Department to clear his name, and authorities kept investigating.

Ivins had in his laboratory highly purified anthrax spores with "certain genetic mutations identical" to the poison used in the attacks, according to an affidavit among a stack of documents the government released, all seemingly pointing to his guilt. Investigators also said they had traced back to his lab the type of envelopes used to send the deadly powder through the mails.

He allegedly submitted false anthrax samples to the FBI to throw investigators off his trail and was unable to provide "an adequate explanation for his late laboratory work hours" around the time of the attacks, according to documents that officials made public to support their case.

Investigators also said he sought to frame unidentified co-workers and had immunized himself against anthrax and yellow fever in early September 2001, several weeks before the first anthrax-laced envelope was received in the mail.

Investigators offered two possible motives for Ivins to mail the anthrax: the scientist was trying to bolster support for a vaccine he helped create and the anti-abortion Catholic was targeting two Catholic lawmakers who support abortion rights.

"We are confident that Dr. Ivins was the only person responsible for these attacks," Taylor told a news conference at the Justice Department.

The documents were released Wednesday as FBI Director Robert Mueller met privately with survivors and families of the victims of the attacks to lay out the evidence the agency had compiled to close the case.

Among them was Patrick O'Donnell, a postal sorter who was sickened by one of the contaminated letters. He came away with mixed feelings about the FBI's case.