Barack Obama brings his message to thousands of Berliners

Democratic presidential contender Barack Obama brought his message of unity before a crowd of tens of thousands in Berlin. His Republican rival, John McCain, campaigned in Ohio and noted he is happy to devote his time to touring the U.S. heartland rather than Europe and the Middle East. 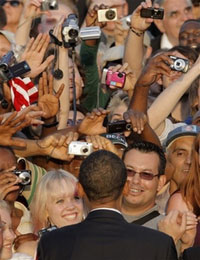 Barack Obama brings his message to thousands of Berliners

Obama's speech Thursday was the centerpiece of a fast-paced international tour with stops in Israel, Iraq and Afghanistan, among other places. The trip was designed to reassure skeptical voters in the United States about his ability to lead the country, and to help heal frayed cross-Atlantic relationships after eight years of the unpopular Bush administration.

He was staying in Berlin through Friday morning before moving on to France and Britain, visits that will conclude a foreign swing designed to counteract criticism from McCain who has called Obama naive and untested in diplomacy, and to place him in presidential settings with key world leaders.

Recalling Berlin's history as a divided city and the front line of the Cold War, Obama said Europeans and Americans must work together to "defeat terror and dry up the well of extremism that supports it," the same as they beat back the Communist challenge in the generations after World War II.

Acknowledging recent strains in the Atlantic alliance and grave differences with Germany over the U.S. invasion of Iraq, Obama said, "partnership and cooperation among nations is not a choice; it is the one way, the only way, to protect our common security and advance our common humanity."

Berlin police estimated the crowd at the base of the Victory Column in the Tiergarten park at more than 200,000.

"The walls between old allies on either side of the Atlantic cannot stand," Obama said, speaking not far from where the Berlin Wall once sliced across the city.

Obama said he was speaking as a citizen of the United States and the world, not as a president, but the evening was a reminder of historic Berlin speeches by Presidents John F. Kennedy and Ronald Reagan.

A spokesman for the pragmatic Christian Democrat leader, who nixed plans by the Obama campaign for an outdoor speech at the once-divided German capital's highly symbolic Brandenburg Gate, said the two had "very open" and wide-ranging talks.

Merkel and Obama discussed foreign-policy issues including Iran, Afghanistan, Pakistan and the Middle East peace process, spokesman Ulrich Wilhelm said in a statement after the meeting.

McCain, meanwhile, tried to take the wind out of Obama's sails with his own German campaign stop - at a restaurant in Ohio.

"I'd love to give a speech in Germany. But I'd much prefer to do it as president of the United States rather than as a candidate for president," McCain told reporters after a meal of bratwurst with local business leaders at Schmidt's Sausage Haus und Restaurant in Columbus.

In what was clearly not a coincidence, McCain spoke shortly before Obama began his speech, telling reporters he was focusing this week on economic issues, such as soaring food and fuel costs.

On Thursday evening, the skin cancer survivor shared a stage at Ohio State University with fellow cancer survivor Lance Armstrong at a nonpartisan forum to which Obama was also invited.

"And that's just the American press," McCain added to laughter. The jest underscored the difficulty McCain has been having in competing for media attention.

The Republican is trying hard to get attention during Obama's week abroad. He had planned to visit an offshore oil rig in the Gulf of Mexico on Wednesday, but rough seas after Hurricane Dolly forced him to cancel the trip. On Friday, he will meet with the Dalai Lama, the Tibetan spiritual leader, in Aspen, Colorado.

McCain occasionally found himself on the defensive on issues on which he maintains he is more qualified than Obama - foreign and military policies.

On Thursday, McCain defended his claim that Obama was more interested in winning a campaign than winning the Iraq war in Iraq. Democrats have suggested McCain was implying that Obama would put American children at jeopardy for political reasons.

"All of us care about our children," McCain said. "I stand by my comments."

McCain has complained that Obama's support for a fixed timetable to withdraw troops ignores progress made under Bush's troop buildup.

Obama scrapped plans Friday to visit wounded members of the armed forces in Germany as part of his overseas trip, a decision his campaign said was made because he thought it would be inappropriate on a campaign-funded journey.