Nicholas T. Sheley, who killed 8, captured while he smoked cigarette

Nicholas T. Sheley, who was the subject of a multistate manhunt after authorities linked him to the deaths of eight people in Illinois and Missouri, was arrested around 7 p.m. outside of Bindy's, a Granite City bar, said bartender Katie Ronk. 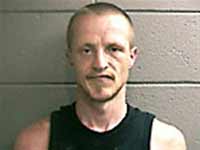 Nicholas T. Sheley, who killed 8, captured while he smoked cigarette

Sheley ordered a glass of water and went to the bathroom before another bartender and customer recognized him, Ronk said. They notified police, who arrived minutes later with FBI agents and took Sheley into custody while he smoked a cigarette outside the bar.

Tim Lewis, the police chief in the St. Louis suburb of Festus, Missouri, said publicity from news reports paid off after 6 p.m. when a number of Granite City residents reported seeing Sheley.

"He was desperate and he gave up without a fight," Lewis said.

A spokeswoman with the Granite City police department said Sheley was in custody there.

The FBI on Tuesday launched a manhunt for Sheley, who they warned should be considered armed and dangerous. Among those authorities believe Sheley killed were a 93-year-old man, a child and a couple whose blood-soaked dogs were found roaming a motel parking lot.

Sheley has only been charged in the death of one of the eight. He faces charges of first-degree murder, aggravated battery and vehicular hijacking in the death of Ronald Randall, whose body was found Monday behind a grocery store in Galesburg, in northwestern Illinois, police said. An autopsy showed the 65-year-old died from blunt force trauma to the head, likely on Saturday.

Investigators said the other victims all appeared to have died in the same manner and that evidence linked to Sheley was recovered at each scene. The FBI and Illinois State Police declined to elaborate.

Authorities said the killings began with the beating death of 93-year-old Russell Reed, whose body was found stuffed in the trunk of a car Thursday. Both men are from Sterling, a town of 15,000 about 100 miles (160 kilometers) west of Chicago.

On Monday, police discovered the bodies of two men, a woman and a child in an apartment on a street of single-family homes in nearby Rock Falls. Investigators believe they likely died late Saturday or early Sunday.

Sheley was acquainted with the male victims, Brock Branson and Kenneth Ulvey, both in their 20s, police said. Police did not identify the woman or child.

More than 250 miles (402 kilometers) away, the bodies of Tom and Jill Estes of Sherwood, Arkansas, were found Monday behind a gas station in Festus, said Bill Baker, with the St. Louis Area Major Case Squad.

The couple had checked into a Comfort Inn in Festus on Friday and were last seen late Sunday. Their dogs were found in the hotel parking lot, unharmed but covered with blood.

Public records show Sheley has multiple convictions for robbery, drugs and weapons charges and has spent three years in prison.

"He's been in trouble many times over the years, but something like this, yeah, it's out of character," his uncle, Joe Sheley, told The Associated Press. "He's got a temper like anybody else. Just doesn't want to be messed with. Won't back down. But to go looking for a fight, looking for trouble, no."

Sheley spent nearly three years in the Illinois Department of Corrections for aggravated robbery between 2000 and 2003 and another 17 months on parole, which ended in April 2005, said IDOC spokesman Derek Schnapp.

Federal prosecutors in northern Illinois charged Sheley on Tuesday with fleeing the state to avoid prosecution for a June 14 felony home invasion in Sterling.