Chinese products to be key topic of coming talks 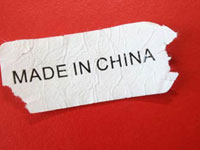 Chinese products to be key topic of coming talks

Paulson said that China's ability to manage the safety of its goods will be a key part of Beijing's future growth and of its trade relations with the U.S.

"American consumers need to have confidence in the safety of the products they purchase, whether produced at home or abroad," Paulson said in a speech to the the Asia Society, an education group.

Paulson and other Cabinet-level officials go to China Dec. 12-13 for the third round of the so-called Strategic Economic Dialogue. Paulson launched the talks a year ago, but so far they have produced little results. Vice Premier Wu Yi leads the Chinese side.

The U.S. has pushed China to improve the safety of its exports in light of a string of high-profile recalls of various items from toys to toothpaste.

Paulson, in his speech, warned of misconceptions in the relationship "that are influencing the rise of protectionism and economic nationalism in both nations."

He defended the high-level talks as helping improve communication between top officials, which was often lacking before.

The talks, he said, "have helped keep the U.S.-China economic relationship on an even keel and helped us manage difficult issues, even in times of tension. Because we have a framework for senior-level dialogue, we can - and do - pick up the phone and we talk. We work toward solutions."

Paulson is expected to continue to press China to move more quickly to institute economic reforms the Bush administration believes are necessary to deal with a huge trade gap between the two nations. The U.S. deficit with China hit an all-time high of $233 billion (€158 billion) last year and is on track to surpass that total this year.

Members of Congress are pushing the administration to act more forcefully to get China to halt what critics see as unfair trade practices. They contend that China is manipulating its currency to keep the value low as a way of boosting Chinese imports into the United States while making U.S. goods more expensive in China.