Amid the scandal over treatment to women in Brazil, a mentally ill teenage girl was repeatedly raped by her inmates while being in jail. 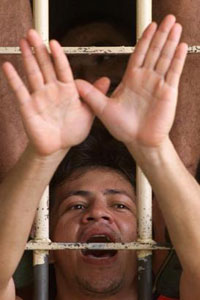 The nation was outraged last week by reports of another teenage girl, 15, being allowed to eat only in return for sex while locked up with men in another Para state prison. She said male inmates beat her and burned her feet with cigarettes to force her to comply.

The mentally ill girl, who was not identified because she is a minor and an alleged victim of sexual violence, was abused by male prisoners in the town of Miguel do Guama, the Para state Bar Association said.

A statement posted on the association's Web site described an account of the rape by a second female prisoner.

"I saw a teenager who was mentally ill being raped by the other prisoners," the second female inmate said this week. "And what's worse, a police officer filmed the entire scene with his cellular phone."

Officials at the bar association could not be reached Friday. The statement did not say why or when the two were imprisoned or elaborate on the mental illness.

The girl was reportedly being held in a cell shared by men and women, which is illegal but not uncommon in lockups across the sprawling state of Para .

Gov. Ana Julia Carepa said in a recent radio interview that only six of the state's 132 prisons have separate cells for women. Carepa this week ordered all female prisoners in the state transferred to a prison near Belem.

A recent U.N. report found that the country's prisons are dangerously overcrowded, often controlled by crime gangs, and that torture is commonplace.