Chelsea says that it may hire overseas coach 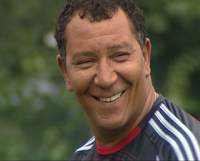 Chelsea says that it may hire overseas coach

Chelsea can hire an overseas coach, the soccer club said in response to rumors that it wants Ajax manager Henk ten Cate as assistant to Avram Grant.

British papers reported Thursday that Ten Cate could join as early as next week, when the Premier League is on hiatus while players take part in international fixtures.

Grant took over when Jose Mourinho left two weeks ago, keeping Mourinho's assistant Steve Clarke in place, but the former Israel coach has said he wants to hire more help.

"Avram Grant has made it publicly clear several times that he intends to strengthen his back room team in addition to his assistant coach Steve Clarke," Chelsea said Thursday. "One of the scenarios Avram is considering is a team containing a British assistant coach in Steve and a foreign assistant coach, a system the first team are already familiar with."