Landis' "B" sample to be analysed by French anti-doping lab 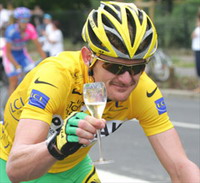 Landis' "B" sample to be analysed by French anti-doping lab

The tests, which were requested by the U.S. Anti-Doping Agency, were taking place at the Chatenay-Malabry lab outside Paris - the same lab that revealed Landis' positive test after he won the 17th stage of last year's Tour.

"The analyses have indeed begun. USADA and Landis are each represented with two experts," said Pierre Bordry, the head of the French anti-doping agency. "The analyses should last about 10 days."

The results will be sent directly to USADA, Bordry said.

Landis, who tested positive for a high testosterone to epitestosterone ratio, insists the tests aren't necessary because, except for his sample following last year's 17th stage, the other primary "A" samples were negative for banned substances.

He wanted the tests conducted at the UCLA lab, which handles much of USADA's testing, but its machines used for the tests are under repair.

Landis has an arbitration hearing scheduled for May 14 in California, at which he is expected to question the practices at the French lab.

If doping allegations against the 31-year-old American are upheld, he faces a two-year ban from competition. He also would be the first rider in the 104-year history of the Tour to be stripped of the title. He already has agreed not to compete in this year's event while the case is pending.