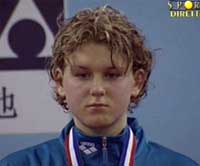 The Russian swimming federation said the 18-year-old Ivanenko was sanctioned for using furosemide, a banned diuretic which can be used to mask steroids.

Ivanenko, who won gold in the 800-meter freestyle at last year's world short-course championships in Shanghai, tested positive in January and had been under a provisional suspension since Feb. 15, reports AP.

The two-year penalty was issued by FINA, the international swimming body, at the world championships currently taking place in Melbourne, Australia.