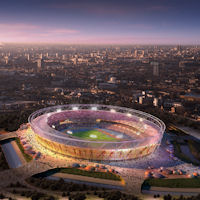 Brian Mawhinney, chairman of the Host City selection panel, named 17 stadiums in 12 candidate cities and towns as potential venues should FIFA award the 2018 event to England at next December's vote.

The possible venues include Wembley Stadium and Arsenal's Emirates Stadium in London, with either Tottenham Hotspur's new White Hart Lane stadium or the 2012 Olympic Stadium to be added at a later date.

The list will eventually be reduced to around 10 or 12 stadiums by FIFA who have the final say and will decide on the host nation in Zurich next December, The New York Times reports.

It was also reported, the Candidate Host Cities have had to make £300 million worth of financial guarantees plus a commitment of over £100 million towards legacy and urban regeneration projects.

The decision was reached by a technical panel chaired by Brian Mawhinney and including England 2018 Chief Executive, Andy Anson, and Chief Operating Officer, Simon Johnson.

Mawhinney said: "This is a tremendous day for the England 2018 World Cup Bid. The whole of football has worked in partnership throughout this process and it is significant that eight Premier League clubs and six Football League clubs' stadiums will be named in our Bid book to FIFA. Additionally, many other clubs are under consideration as training venues.

"We are committed to producing a technical bid that exceeds FIFA's requirements and we believe the outstanding work of the Candidate Host Cities we will now be putting forward gives us the best chance to do this and be successful at the vote in December 2010.

"Our Candidate Host Cities provide an exciting mix of iconic venues, stadiums that can be extended and brand new builds. Importantly this process ensures our cities are 100% compliant with FIFA's technical criteria and that crucial guarantees have been signed ahead of our submission to FIFA on 14th May 2010. We look forward to the hard work ahead with our new Candidate Host Cities in finalising a technical bid this country can be proud of," ESPN reports.

BBC Sports quoted Leeds City Council leader Andrew Carter as saying, "This is fantastic news. Leeds would make an ideal World Cup host city and we are now a step closer to making it a reality.

"Our proud football heritage, passion for sport and vision to leave a lasting legacy after the tournament makes us a perfect venue to be a host city for the world's biggest sporting event. Hosting matches would put Leeds firmly on the world map and give a multi-million pound boost to the local economy," BBC Sports reports.