Center Travis Zajac was signed to a multi-year contract by the New Jersey Devils on Wednesday. It was a reward for his best season yet. 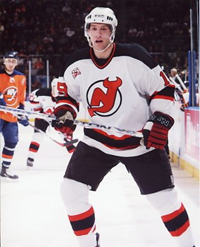 The 24-year-old Canadian posted career highs with 20 goals, 42 assists, 62 points, and a team-leading plus-33 mark in 2008-09, while appearing in all 82 Devils games for the second straight season, Reuters reports.

Devils chief executive Lou Lamoriello said in announcing the signing that "During his previous three seasons in the National Hockey League, Travis Zajac has proven to be among the top young players in the game, and has developed into one of the core players on our team," The Canadian Press reports.

Zajac represented Canada in international competition for the first time at the world championship in April.

The six-foot-three, 195-pounder became a leader on the ice in the Stanley Cup playoffs this past spring.

"Last year was disappointing," Zajac said in reference to the 2007-08 campaign. "A lot of the year I didn't play up to my capabilities. This year has sort of been the opposite," CBC.ca reports.