Family, friends and fans gather to pay tribute to McNair. 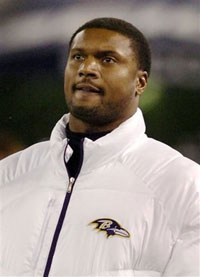 Fans lined up outside a funeral home to view the closed silvery-gray casket topped with white lilies next to a portrait of the former Titans star. A helicopter provided live TV footage as McNair's body was taken by hearse to the Mount Zion church for a memorial service last night.

"No more turf toe, no more sacks. No more shoulder problems, and no more interceptions, only touchdown passes. I'm going to miss you No. 9," Fisher said, The Philadelphia Daily News reports.

Airbrushed letters on the back of her T-shirt read, "When I was sick, you took time out to come visit - #9 forever," Jackson Clarion Ledger reports.

McNair, who was married, was shot to death at his condo early Saturday by his 20-year-old girlfriend, Sahel Kazemi, who then turned the gun on herself, The Associated Press reports.

The bodies were found in a condominium on Saturday afternoon in downtown Nashville, authorities said.

McNair spent 13 seasons in the National Football League, mostly with the Tennessee Titans, with whom he excelled as quarterback. He was named the NFL's co-MVP in 2003 and spent his last two seasons with the Baltimore Ravens before announcing his retirement in April 2008, CNN reports.