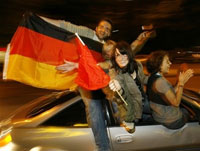 Germany's last-minute 3-2 win late Wednesday night was greeted with chants of "final," fireworks and honking car horns across the country. Despite pre-match fears that the game would cause tension between rival supporters, German and Turkish fans mostly watched and celebrated peacefully side by side.

"I think yesterday evening made a significant contribution to the companionship of Germans and Turks in Germany," Lammert told lawmakers. "Now, after these extraordinary events, we have to return to normal business, which isn't very easy."

In what appeared to be the only significant post-match trouble, police in the eastern city of Dresden said several dozen masked assailants broke the windows of three kebab stalls, throwing bottles inside and setting off firecrackers. In one stall, a Turkish flag was set alight and two employees injured.

The assailants fled the scene before officers arrived. Police were investigating the incident on Thursday.

Elsewhere in Germany, police reported no major problems as fans crowded open-air festivals to watch the match - with some 500,000 following the game in front of Berlin's Brandenburg Gate alone.

Police in the capital, home to about 200,000 people of Turkish origin, said there were 84 arrests in all in the city as a result of minor incidents - "given the number of football fans, a fairly small figure," according to a statement.

Germany is home to about 2.7 million people of Turkish origin, an estimated 500,000 of whom are German citizens. Since the teams set up their semifinal clash, Turkish and German flags have flown side by side from balconies and car windows.