Felipe Paulino to stay off for month

Felipe Paulino, a Major League Baseball pitcher for the Houston Astros, will stay from playing for about a month. 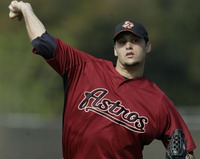 Felipe Paulino to stay off for month

The following news the pitcher received on Wednesday after the examination that didn’t reveal any serious injury. The tests showed that the structures in his sore right arm are sound, and it was only a pinched nerve that bothered the player.

In spite of this diagnosis Paulino was strongly recommended to keep from throwing and to find other ways to remain in condition.

The current state of things takes him out of the running for a starting job this spring and cuts into his time on the mound during the regular season for Triple-A Round Rock.

Paulino was called up to the major league in September of 2007. He made his major league debut on September 5, 2007, against the Milwaukee Brewers and three 3 innings, give up 5 runs.