An Alabama elementary school sent a congressman with a $2,400 (1,730.73 EUR) gift to the embassy of Kazakhstan for a cancer hospital in the former Soviet republic. 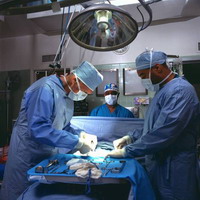 Kazakhstan's U.S. ambassador responded by pledging to visit the state and said he hopes the gift from Dodge Elementary School in Mobile marks the beginning of a long-lasting friendship.

"We will make sure the people in Kazakhstan know about this," Ambassador Erlan A. Idrissov said as Alabama Republican Rep. Jo Bonner, presented the school's check at the nation's embassy in Washington. "It's not the amount of money that matters. It is their passion and their hearts."

Students at Dodge Elementary raised the money as part of a fund drive that stretched over several years.

Teacher Janet Leffard said the idea of donating to Kazakhstan came out of the school's gifted-student curriculum in which students focus their studies around particular regions of the world.

In her research, Leffard learned that Kazakhstan is struggling with high cancer rates after being used as a Soviet nuclear weapons testing site during the Cold War. Leffard and her students decided to donate part of their receipts from the fund drive to the Semipalatinsk Oncology Center, which is in a particularly hard-hit area.

Collecting more than $7,000 (5,048 EUR), they also donated $2,400 (1,730 EUR) each to the USS Hope cancer center at the University of South Alabama Children's and Women's Hospital and to a children's cancer fund in England, Leffard said.

"It was a big collective effort," Leffard said. "Everybody was very enthusiastic. The kids were excited."

At the embassy Tuesday, Bonner and Idrissov exchanged books and information about Alabama and Kazakhstan, which sits between Russia and China. Idrissov gave Bonner a bottle of his country's prized vodka.