According to a new study women who are obese  before pregnancy have a higher risk of having babies with different birth defects than women with a healthy weight. 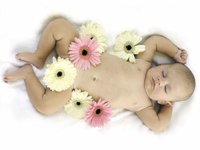 The results involving nearly 15,000 women from eight U.S. states found abnormalities of the spine, heart, arms, legs and abdomen, building on previous research that showed heart and spine defects. The greatest risk was for spina bifida.

"Obese women should not be overly alarmed by these findings because their absolute risk of having a child with a birth defect is low, and the cause of the majority of birth defects is unknown," said University of Texas researcher Kim Waller, the study's lead author.

Still, the results underline yet another reason for women to maintain a healthy weight, Waller said.

The findings suggest that about 4 percent of women who are obese before pregnancy will have babies with major birth defects, versus 3 percent for healthy-weight women, Waller said.

Obese women faced double the risk of having babies with spina bifida than women of healthy weight. With spina bifida, the most common disabling birth defect in the United States, the spinal column fails to close properly. That often leads to leg paralysis, learning difficulties and other serious problems.

The study was released Monday in the August edition of Archives of Pediatrics & Adolescent Medicine. It was funded by the federal Centers for Disease Control and Prevention.

"This is probably an under-recognized finding which I suspect will be corroborated by other research in the future and something we will need to talk to our patients about," said Dr. Alan Peaceman, a high-risk pregnancy specialist and professor at Northwestern University.

The research is part of the National Birth Defects Prevention Study, involving women who were pregnant between October 1997 and December 2002.

Participants included 10,249 women whose babies were born with at least one birth defect. They were compared with 4,065 women with healthy babies.

Women were asked what their height and weight had been just before they got pregnant. Based on those responses, the researchers calculated that 2,312 women were obese pre-pregnancy.

Reasons for the potential link between obesity and birth defects are unclear, Waller said. It is possible that some women had undiagnosed diabetes, which also is linked to birth defects, she said.

While the study did not examine weight during pregnancy, it is also possible that some women tried potentially dangerous weight-loss techniques right before conception or during early pregnancy, when most birth defects occur, the researcher said.

She urged obese pregnant women, however, not to try diet pills, fasting or other aggressive methods which also might contribute to risks for birth defects.