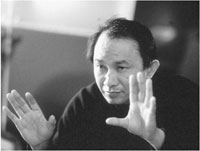 Chang told The Associated Press last year he was impressed with Tan's ability to tell a story quickly.

"Blood Brothers" is a Chinese-Taiwanese-Hong Kong co-production about the breakdown of friendship between three young men who move to Shanghai from the countryside in the 1930s.

Tan, schooled in London and at New York University's Tisch School of the Arts, started out as a photographer before moving on to directing TV commercials and music videos.

He is ethnic Chinese but grew up in the Philippines.

"Blood Brothers" is one of two projects that mark Woo's return to Chinese cinema after a stint in Hollywood, where he won acclaim for movies like "Broken Arrow," "Face/Off" and "Mission: Impossible 2."

Woo is currently directing the Chinese historical epic "Red Cliff," based on an ancient Chinese battle by the same name. The hugely expensive production has been plagued by casting changes, including the pullouts of Chow Yun-fat and Cannes best actor winner Tony Leung Chiu-wai. Leung later rejoined the cast.

Chang earlier said the budget for "Red Cliff" was more than US$80 million (EUR 58.7 million) - huge by Chinese standards - although he later claimed that figure was overstated.

With the addition of Tan's movie, this year's Venice Film Festival has a strong Chinese flavor.

The festival's jury will be chaired by famed Chinese director Zhang Yimou, who made "Raise the Red Lantern," "The Story of Qiu Ju" and "To Live."

The film adaptation of Ian McEwan's novel "Atonement" will kick off the festival, but the rest of the lineup will be announced July 26 in Rome.