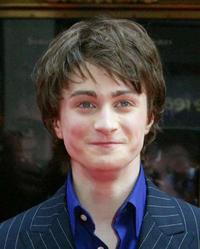 As the premiere of "Harry Potter and the Order of the Phoenix," was performed in Tokyo, a red carpet was rolled out for the most popular wizard of the World.

"Japanese fans are the best!" Radcliffe, dressed in a white suit, said in simple Japanese.

"Order of the Phoenix," which opens in the United States on July 11 and in Britain the next day, is directed by David Yates, a Briton best known for the multilayered TV thrillers "State of Play" and "Sex Traffic."

The film opens as Hogwarts School of Witchcraft and Wizardry is undergoing a gradual takeover by the bureaucratic Ministry of Magic and its emissary, Defense Against the Dark Arts teacher Dolores Umbridge, played by Imelda Staunton.

The sense of impending doom is heightened by a series of nightmares that link Harry ever more closely to the devilish Voldemort, bringing Rowling's saga into even darker territory.

The Harry Potter books have been translated into 65 languages and sold more than 325 million copies since the first volume, "Harry Potter and the Philosopher's Stone," was published in 1997.

After this movie, the next Harry-related frenzy will be the publication of the seventh and final book, "Harry Potter and the Deathly Hallows," on July 21.

Radcliffe and co-stars Emma Watson and Rupert Grint, who play Harry's friends Hermione Granger and Ron Weasley, have been at the center of the Harry Potter storm for almost half their lives.

"It's just absolutely brilliant. He's an icon," Radcliffe said, explaining why he has been playing Harry for such a long time. "He is somebody whose character has gotten his generation of kids into reading. So it's an honor to play him."

All three stars have signed up for the final two Potter films, the first of which - "Harry Potter and the Half-Blood Prince" - starts shooting in September.

All three young stars have begun to look toward life after Harry Potter. Watson wants to attend university and would like to appear in a costume drama. Grint, too, wants to continue acting.

Radcliffe has already begun to branch out, appearing in the Australian film "December Boys" - due for release later this year - and making his stage debut in "Equus."