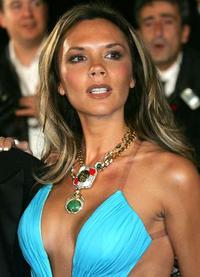 Undisclosed damages from a celebrity magazine were accepted by Victoria Beckham. It had claimed that the crew of her U.S. television show considered her "picky, demanding and rude."

The former Spice Girl had sued Star Magazine over an April article which claimed staff working on the NBC show also described her as "full of herself and not very nice."

Beckham's lawyer, Gerrard Tyrrell, told Britain's High Court that filming on the show had not begun at the time the story was published.

"The story was therefore completely inaccurate and defamatory of Ms. Beckham," he said.

Northern & Shell PLC, which publishes Star, apologized and agreed to pay Beckham's legal costs and "substantial" damages. The amount of damages was not disclosed.

Beckham, who is married to soccer star David Beckham, was not in court for Monday's hearing. The couple have recently moved to the United States, where David Beckham is due to join Major League Soccer's Los Angeles Galaxy next month.

"Victoria Beckham: Coming to America" is scheduled to air July 16.