Paris Hilton says jail time has made her 'much more grateful' 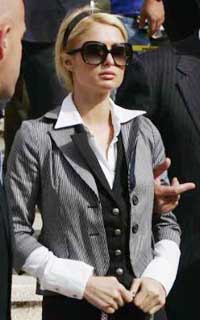 Paris Hilton says jail time has made her 'much more grateful'

The 26-year-old heiress, who will be released from jail soon, told Ryan Seacrest of E! News that her "gratitude has gone up so much" since she has been behind bars.

Hilton has been in custody since June 3 for violating probation for driving with a suspended license. She is housed in the special-needs unit of the Century Regional Detention Facility in Lynwood, a suburb of Los Angeles.

She called Seacrest on Thursday to talk about how the experience has changed her.

"I'm much more grateful for everything that I have, even just to have a pillow at night or food," she said.

Serving time has been tough, she said, and visits with her family have been emotional.

The star of TV's "The Simple Life" also talked about her status as a tabloid darling.

"I just realize that the media used me to make fun of and be mean about it," she said, adding that she is "frankly sick of it" and that she wants to "use my fame in a good way."

The interview is scheduled to air on E! News on Thursday and Friday.