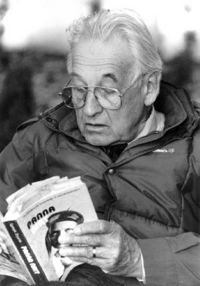 The United States is honoring the Oscar-winning Polish film director Andrzej Wajda as a "moral and professional authority" for films that chronicled the development of the Solidarity freedom movement.

Wajda, who supported the pro-democracy movement that helped topple communism in 1989, is the first recipient of the new award from the U.S. Embassy in Warsaw. The award, celebrating contributions to U.S.-Polish understanding, is to be given annually.

"He is not only one of the most acclaimed directors in the history of film, but he brought Polish culture and politics to U.S. and international audiences through his films," U.S. Ambassador Victor Ashe said in a statement before the Monday evening ceremony.

"Wajda also put his career at risk in order to defend the truth and the civic rights of people, particularly the freedom of speech," Ashe said, adding that Wajda "has been a moral and professional authority for many Polish people and for many foreigners."

Wajda, 81, won an honorary Oscar in 2000 in recognition of works that maneuvered between a repressive communist government and an audience yearning for freedom.

He established himself as a key figure in the Polish cinema in 1955 with his first feature film, "A Generation," a study of the effects of World War II on the nation's disillusioned youth. In the 1981 film, "Man of Iron," Wajda chronicled the development of Solidarity, featuring footage of the movement's founder and leader Lech Walesa.