Twenty-two years after making her Hollywood debut in the movie version of Alice Walker's "The Color Purple," and two years after her Broadway debut as producer of the musical of the same name, talk-show host Oprah Winfrey saw the stage show premiere in her home city, Chicago. 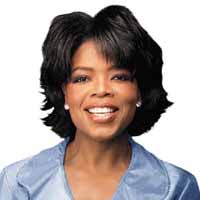 "There's an intimacy and an obvious connection that I feel here that I couldn't possibly feel in New York," said Winfrey, whose Harpo Studios are only a few blocks from the theater.

Winfrey said there now are plans to take the show to South Africa.

"It's pretty powerful for me, on every level, to come down the same street where I first saw the movie 21 years ago, and my name wasn't allowed to be on the marquee, and to be able to know now that I was a part of being able to bring it here," she said. "It's really a powerful feeling."

Crowds of fans jammed the sidewalks Thursday for nearly an hour before Winfrey's arrival. Few even noticed R&B star R. Kelly, who stood on the red carpet in an eye-catching, military-style suit.