'Til Death': Brad Garrett rings up laughs in Fox sitcom about matrimony

"I was a weird kid," says Brad Garrett, then adds, in a tone of rueful satisfaction, "It's easier to be a weird adult." 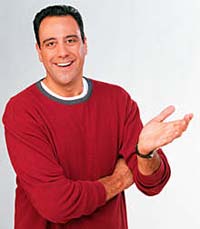 'Til Death': Brad Garrett rings up laughs in Fox sitcom about matrimony

More rewarding, too. Garrett scored nine seasons on "Everybody Loves Raymond" as Ray Romano's hulking, hangdog brother. And now on the Fox sitcom "`Til Death" he's a hulking, hangdog hubby butting heads with Joely Fisher as his mate of nearly 9,000 days.

Even better, this time Garrett is top dog.

"It was all part of my scheme," quips Garrett in his mournful baritone: "to one day have my own show where I'm getting beat by Telemundo."

Now, now. Since premiering last fall, "`Til Death" may not have been a ratings powerhouse. But in its new time slot Wednesday, right after "American Idol," lots of new viewers are likely to discover the factious world of high-school history teacher Eddie Stark and his not-so-joyous wife, Joy.

Theirs is a marriage where any issue is worth bickering about.

On one episode, Joy says you save electricity by unplugging the toaster oven when it's not being used. Eddie says no you don't.

And he can't rest until he proves Joy wrong.

"I never feel more alive in my life than when I'm showing the woman I love how wrong she is," he tells fellow teacher Jeff (Eddie Kaye Thomas), a young newlywed whose marriage to Steph (Kat Foster) is, so far, all hearts-and-flowers.

The viewer is invited to regard these two couples as an exhibit of marriage's natural evolution: a Before and After display. Or maybe they represent the extremes (love and war) that coexist within a typical marriage at any given time.

Whatever, an observer may find that "`Til Death" has a bitterly funny ring of truth.

It did for Garrett when he read the pilot script and decided to sign on.

"I'm a lot like this guy," he says, taking care to draw distinctions between Eddie and Robert, his Emmy-winning character on "Raymond":

"Robert is a ho-hum, downtrodden guy who kind of goes with whatever somebody is putting in front of him at the moment. Eddie is more of a trailblazer, more outspoken. That's what attracted me to him: He's VERY outspoken.

"And couldn't be more wrong most of the time!"

Eddie Stark is informed (if "informed" is the word) by battle-scarred married man Ralph Kramden, TV's eternal archetype of matrimonial strife. And Kramden is a chap Garrett knows well, having portrayed Jackie Gleason in a TV biopic in 2002.

"It's hard to play a loud married couple trying to get through life without going back to `The Honeymooners,"' he notes.

Garrett, who turns 47 next month, won TV stardom only after years as a standup comedian, his entry point into show business when he was in his teens. Standup seemed like a good career option for a youngster who had always been ripe for ridicule.

Now a towering 6-feet-8 1/2 (2 meters, 3 centimeters) Garrett even at 12 stood a foot (30 centimeters) taller than anyone his age, with a voice already so deep he sounded like an older kid who had been held back two or three grades. And to make matters worse, his athletic prowess was nonexistent.

Garrett sets the scene for one attempt to make the basketball team: "Instead of wearing shorts or sweats, I show up in jeans with a butterfly and a rainbow my mother had sewed on." Even then, in the early 1970s, this was the wrong fashion statement for a basketball tryout.

"So I said, `I'll start making fun of myself and beat everybody to it. It will ease the sting of them doing it."'

He found he was good at making them laugh. Example: Once he cut off the elastic waist band from his BVDs and wore it as a head band.

Not that he hasn't been taking some painful hits of late. Like his marriage coming apart.

And although he isn't divorcing anybody in his new sitcom, the subtext of the show is "if only!" On "`Til Death," marriage is wedlock with the emphasis on "lock."

Garrett's real-life marital woes "helped motivate my characters," he allows. "But I learned that sometimes it's too soon to bring that kind of stuff to a character. You almost have to be over it to use it.

"It was hard. I've been in therapy a lot," he says before yielding to his frequent urge to make a joke: "Actually, I was in group therapy - alone, reports AP.

"And it's still hard." But it could be worse. He remains a devoted dad to daughter Hope, 7, and 8-year-old Max, who, he says, have given him a second crack at childhood: "You get to see it through healthy eyes."

Meanwhile, his relationship with Jill is good. "She's an extraordinary mother and a great friend. So someone might wonder, `What's your problem?' I guess it's me. I hate to say it, but I think marriage is a very unrealistic longtime compatibility formula."

The good news for Garrett: It's a reservoir for comedy that never runs dry.