Pop princess Britney Spears took her new boyfriend Isaac Cohen to a romantic weekend in Las Vegas. The couple was accommodated in the Playboy Fantasy Tower at The Palms hotel. Spears paid $40,000 for just one night relaxing with Cohen in the two-story Sky Villa enjoying a Jacuzzi pool, a glass elevator, a rotating bed and a bar full of alcohol drinks of all varieties. 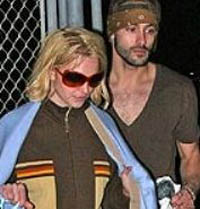 Britney was spotted dancing, drinking and smoking cigarettes with Isaac at a gay nightclub. However, the singer apparently had too much alcohol: she threw up all over Cohen. British tabloids published pictures of Britney slumped over Cohen in their car, while he wipes his clothes and the gear stick with paper towels. Spears had to use a lollipop to get rid of the utterly unpleasant aftertaste.

An onlooker told British newspaper The Sun : "The car suddenly stopped and Britney was being sick. As soon as they realized they could be seen, Isaac tried to cover the mess with his shirt."