Actor Jackie Chan plans to mine new action movie talent through a Chinese TV talent show scheduled to run later this year, organizers and a spokesman for Chan said Tuesday. 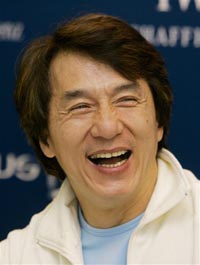 The TV show, whose Chinese title translates as "Descendants of the Dragon," is jointly organized by Chan and Beijing TV Station, known as BTV.

The show's title is a word play on Chan's Chinese stage name, which translates as "becoming a dragon."

It was not clear whether Chan would host the show.

BTV said in a statement on its Web site the show will run from March to October, with 10 winners appearing in a movie to be produced by Chan. It said the movie will be released before the 2008 Beijing Olympics.

Chan spokesman Solon So confirmed the action star's involvement in the TV project and said winners of the show will be cast in one of his movies.

Chan was quoted as saying in BTV'S statement that he will personally groom the winning candidates.

"They'll follow me when I make movies, edit movies with me. I will groom them into a good descendant of a dragon," the action star reportedly said.

The show's official Web site said more than 43,000 people have signed up for the contest. It did not say what sorts of challenges they would face, reports AP.

The Web site has posted mug shots of contestants with colorful nicknames like "Dragon of the Century" and "Ambassador for the Spirit of Martial Arts."

Separately, Chan spokesman So said the actor is due to finish shooting the third installment of the "Rush Hour" series by the end of March. He said Chan's next project hasn't been confirmed.

In August, Chan said he was close to confirming his involvement in a movie with Jet Li and that he was due to appear in another film in Japan with Hong Kong director Derek Yee.