The father of the 13-month-old Malawian boy Madonna is trying to adopt insisted Friday that he supports her, and criticized human rights activists here who want the courts to review the process. 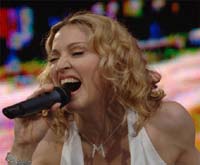 "I am surprised what these guys are up to," Yohane Banda told journalists outside the courtroom where a hearing on the human rights group's challenge was held Friday. "Me and my family agreed with the adoption. I just want these people to leave my son alone."

The Human Rights Consultative Committee, a coalition of 67 Malawian rights groups, has petitioned the court to make sure no Malawian laws were broken in the adoption process, and to make the committee a party to the adoption so it can help assess Madonna's fitness as a mother.

Judge Andrew Nyirenda held a closed, 90-minute hearing on Friday. He then set another hearing for Nov. 13 to allow lawyers for the committee to submit additional arguments on why the adoption process should be reviewed and why the committee should be a party.

Alan Chinula, the lawyer for Madonna and her husband, film director Guy Ritchie, said he told the judge Friday that no laws had been broken.

"We followed the adoption procedures to the letter," said Chinula.

Justin Dzonzi, the chairman of the human rights committee, said it was not trying to block the adoption but wanted to be a party to the process to make sure Malawian laws were respected.

"We want to be part of the assessment of Madonna to ascertain that she is a suitable mother," he said.

Typically, prospective parents are required to undergo an 18-month evaluation period in Malawi. But the judge who granted an interim custody order to the Ritchies on Oct. 12 said the issue of residence is not specified in the laws. David Banda was taken to London, where Madonna has a home and where a social worker will check on him for the next 18 months.

Child advocates stress that while they do not question Madonna's motives and ability to care for an adopted child, rules and regulations adopted to protect children should be respected. Otherwise, child traffickers or pedophiles might take advantage of loopholes.

Madonna, appearing on "The Oprah Winfrey Show," said Wednesday that she had done nothing wrong, had not used her celebrity to influence Malawian officials and wanted to give David a better life.

The boy's father is a subsistence farmer whose wife died shortly after childbirth _ a relatively frequent occurrence in this impoverished African nation, which suffers from high rates of maternal and infant mortality. Yohane Banda, who left his son with the Malawian orphanage where Madonna found him, lost two other children to malaria in infancy.

In an interview with The Associated Press on Sunday, Banda said authorities had not made it clear to him that he was giving up his son "for good" when he signed adoption papers earlier this month. But Thursday, he shifted the blame to human rights groups.

"I was telling these rights groups that I wasn't selling my son. I said I wouldn't ... sell my son for anything but I had agreed with Madonna before a judge so my comments were taken out of context and I hope Madonna is not angry," he said.

Madonna's adoption plan has sparked international debate about how best to help the millions of African children orphaned because of AIDS and other causes. In a statement Friday, the British aid group ActionAid said adoption was only part of the solution.

"ActionAid does not doubt Madonna's good intentions, or that David Banda has been given the chance of a safe and secure life, but it believes there are better ways to help," the group said. "ActionAid says a good first step would be for celebrities to use their influence and popular appeal to campaign on behalf of people living in poverty. It also calls on celebrities and the public to support child sponsorship schemes."

Madonna has launched several charity projects in Malawi, including building an orphanage.

Malawi is among the poorest countries in the world, with rampant disease and hunger, aggravated by periodic droughts and crop failure. Some 14 percent of its 12 million people are infected with HIV, the virus that causes AIDS, and an estimated 1 million children have been orphaned. In many villages, grandparents or older siblings struggle to feed orphans. Other orphaned children end up on the streets.