On January 10th, a group of young people took off their trousers for the Russian version of the world-famous "No Pants Subway Ride" flashmob in the Moscow metro. The act received mixed reactions in the Russian society and attracted the attention of law-enforcement authorities. Many Russian Internet users found the act revolting. The participants of the flashmob said that they were simply trying to cheer up Muscovites. 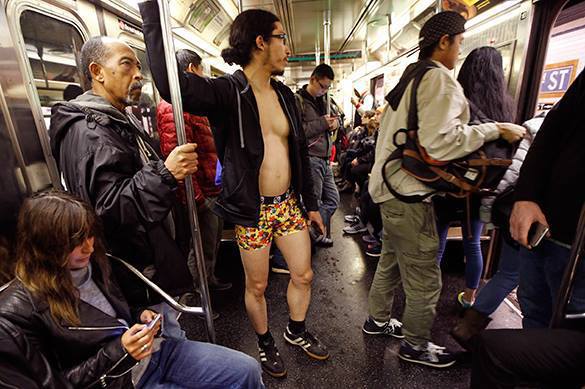 The "No Pants Subway Ride" is held in many countries every year. The participants of the act take a subway ride stripped to their underwear below their waste and act like common subway passengers, as if they are dressed like everyone else.

Pravda.Ru asked an expert opinion from sexologist Yuri Levchenko. We asked the doctor how one should classify this type of behavior.

"In Western countries, where the climate is much warmer than in Russia, young people may often go on such adventures. The people who did the same in the Moscow metro haven't done anything wrong, even though law-enforcers are trying to find them. They did it just for fun," Yuri Levchenko told Pravda.Ru.

"If people want to express something by nailing their genitals to cobblestones of Red Square, such acts must be definitely stopped. This act is just a game of the youth. The less attention we pay to it, the better. This is just a silly act that doesn't deserve so much public attention," the candidate of psychological sciences said. There is nothing but youthful enthusiasm and hooliganism behind it," the expert concluded.