Chinese woman forced to eat THIS for breakfast. Shocking photo 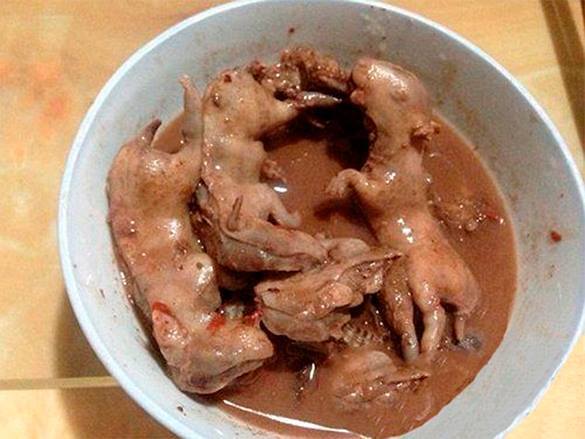 Oriental and Asian cuisines are known for their peculiarities in different parts of the world. Everybody has seen photos of bizarre delicacies, such as insects, worms, bugs and rodents.

A young woman from the Chinese province of Fujian was forced to "enjoy some exotic food." The woman, Chen Fuzhou, posted a photo of her breakfast that her mother served her one day. In the bowl, there were a few boiled mice in a brown sauce.

Chen's mother explained that it was "mice soup" and offered the daughter to take it. Chen refused, but her mother told her that one cooked mouse was as nutritious as three chickens. She also told her daughter that it took her a lot of time to make the dish, and Chen was forced to eat the mice not to upset her mother.

According to Pravda.Ru, mice are considered one of eight types of most unusual delicacies of China's Fujian Province. Local residents believe that mice dishes contain a unique complex of vitamins that improve hair structure and prevent hair loss.

More information on the subject here

Author`s name: Editorial Team
12:48
Nearly 1,000 fighters leave Azovstal and surrender to Russian forces
19:01
Putin: EU's refusal of Russian energy resources is an economic auto-da-fé
16:56
Finnish parliament votes for country's membership in NATO
15:47
Finnish admiral suggests Russians be buried in the land of Finland, as in 1939
13:06
Moscow says Finland and Sweden's entry into NATO will 'untie' Russia's hands
12:53
Kremlin declared the United States hostile to Russia
21:11
Ukraine blows up ammonium nitrate to accuse Russia of chemical attack
19:35
German Leopard 2A4 heavy tanks spotted in Ukraine
18:42
Russian large landing ships disappear from naval base in Novorossiysk
18:00
Chechnya thanks the West for the weapons supplied to Ukraine
Hotspots and Incidents
Up to 16,000 Ukrainian soldiers entrapped in Luhansk People's Republic