Jackson's Doctor is Back to Practice

Michael Jackson's doctor is back to work at his Houston medical clinic for the first time since before the iconic pop star's death in June. 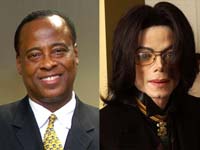 Jackson's Doctor is Back to Practice

A lawyer for Conrad Murray said he "plans to attend to patients in both Las Vegas and Houston".

The move, he said, was partially due to "a deteriorating financial condition".

The statement follows an interview by Jackson's sister Janet in which she said Dr Murray should no longer be allowed to practice medicine.   "He was the one that was administering," she said last week. "I think he is responsible."

Dr Murray has been the focus of a homicide investigation in Los Angeles since telling police he gave Jackson the powerful anaesthetic Propofol to help him sleep.

The cardiologist had been hired to be Jackson's personal physician and was with the 50-year-old at the time of his death in June.

Murray, who has not been charged with a crime, maintains he neither prescribed nor administered anything to Jackson that killed him.