'Surrogates' as Vision of People's Addiction to Technology

Following a six-year absence, the director Jonathan Mostow is back in theaters with  “Surrogates" , story, which is meant to say something about our addiction to technology. 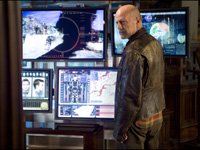 'Surrogates' as Vision of People's Addiction to Technology

Two senior Disney executives, speaking on condition that they not be named because they were criticizing their own movie, said that star Bruce Willis -- who hasn't been in a major studio production for two years and whose recent box-office performance outside "Die Hard" movies has been uninspiring -- did not get along well with Mostow and that the results were visible on screen.

"Everybody wants their movie to be successful enough so that they can work again. But this movie wasn't that expensive a movie," the 47-year-old filmmaker says of his $80-million production. "In a world where they are making $200-million movies, I can't imagine that this is a make-or-break thing. I've made movies for $1 million and I've done movies for a lot more," says Mostow, whose previous action films include 1997's "Breakdown" and 2000's "U-571."

Audience tracking surveys suggest "Surrogates" could open in first place at the box office, with projected weekend ticket sales of about $20 million. It would be among the better openings for Willis outside of a "Die Hard" movie, about double the premieres for the actor's "Perfect Stranger" in 2007 ($11.2 million), 2006's "16 Blocks" ($11.9 million) and 2005's "Hostage" ($10.2 million).

In the "Surrogates" Mostow expressed his vision of the near future, when  people would not have to leave their homes because they can live, work and party vicariously through cosmetically flawless, robotic surrogates -- could prove especially timely in an era when people are so tethered to technology they scarcely can go a minute without checking their iPhones.

"It is addressing in some sense this generalized anxiety we have about technology," Mostow says. "It's easy and fun to use, but what is it costing us?"

"Surrogates," adapted by John Brancato and Michael Ferris from Robert Venditti and Brett Weldele's graphic novel of the same name, stars Willis as Greer, an FBI agent looking into the murders of several surrogates and their human masters. Like most of the world's population, Greer has two halves: His better-looking surrogate is controlled by his stay-at-home, somewhat grizzled, real self. The Stepford-pretty robots (including Greer's FBI sidekick, played by Radha Mitchell) have helped eliminate crime and racism, but their human operators have even less personal contact than modern-day adults who play World of Warcraft all day and night.

Greer is increasingly melancholy over the disconnect, as is the Prophet (Ving Rhames), who has established robot-free reservations. "We're not meant to experience the world through a machine," the Prophet implores his followers.

"There have been thousands of movies about robots, but they've always been sentient. Here the robots are just tools,"- Mostow said in a statement.

Despite what the Disney executives contend, Mostow said his relationship with Willis was fine.

"Bruce is a professional, and he gave a strong performance. I admire Bruce as an actor." A spokesman for Willis said: "Bruce has no problems with Jonathan Mostow at all. And he also thinks [Willis] did a very good job in the movie."

If there's one thing Mostow says he'll take away from "Surrogates" -- in addition to making sure he and his family don't spend more time online than they do speaking to one another -- it's that he's ready to make a movie that doesn't involve servos and solenoids.